Remember that highly rated review I posted of Don Calame's upcoming novel, Swim the Fly, a few days ago? (If not, refresh your memory here.) Well, I am happy to say that Don agreed to answer my interview questions as well as provide a copy of Swim the Fly for the winner of this giveaway! This has been an incredibly fun author talk, and you'll find out why when you read onwards. Please welcome...
DON CALAME! (He's the human, not the other one.)
1. Hello Don, and thanks for agreeing to this interview! How did you come up with the story for SWIM THE FLY?

It began as a short piece I wrote at a writing workshop five or six years ago. Just a page and a half scribble about the summer I was “asked” to swim the 100 yard butterfly by my swim coach. It was more of a rhetorical questions when my coach asked me so, really, I had no choice. One of the guys I was swimming against was this huge, muscle-bound kid who looked like he was twenty-five instead of fourteen.

My wife suggested I write it as a novel for teens and I owe her an enormous debt because it’s the most enjoyable writing experience I’ve had so far.

2. Matt, Coop, Sean, and even Matt's grandfather are such strong characters with unique voices. What influences did you draw on to create these characters? Do you have a favorite character, or one you can relate to best? 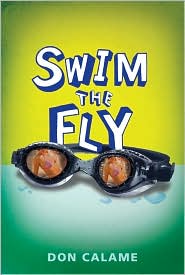 I didn’t really base any of the characters on anybody specifically. A few of the characteristics, maybe. My mom did sell health products out of the home for a period of time, if I remember correctly. Though I never accidentally drank any of the laxative powder (I swear. That’s my story and I’m sticking to it.)

And I knew kids like Sean and Coop growing up. But I never even knew either of my grandfathers and my swim coaches were nothing like Ulf or Ms. Luntz.

Mostly, the characters sort of blossomed on the page as the story developed.

I guess there’s a little bit of each of the characters inside me. Though I’m probably most like Matt.

3. Characters in SWIM THE FLY are on a summer swim team. Do you have any experiences with swimming? Were they as terrifying as Matt's?

I was on swim team every summer from around seven years old until my late teens. I have fond memories of it but I also remember hating having to go to swim practice every morning and as I got older, wearing a Speedo was not the coolest thing in the world to be doing.

Nothing quite like what happens to Matt happened to me, but I was enlisted to swim the fly, much to my horror, one summer. 4. How did you come up with the characters' names? Do they have any significance for you, or did they just feel right for the characters?

I tried to come up with first names that felt right for each character. Last names are always difficult for me. Usually, I break out a Hockey News and take one of the hockey players last names that seem to fit the character.
Ulf I got from a hockey player named Ulf Samuelsson (although he is Swedish). Mostly, I just liked the name, I think because it means wolf.

5. You've had a lot of different writing backgrounds, most notably as a screenwriter. How has that affected your novel-writing?

It’s effected my prose writing quite a bit. When I write I think very visually. Everything is scene oriented. Which sometimes makes it difficult for me to expand a story. Originally, the story occurred over three weeks and my editor wisely made me expand it to cover the entire summer, which I think works much better.

Also, I write a lot of dialogue. Which makes the pages add up really quickly.

6. You have a great sense of comic humor that is evident on your website, blog, and in SWIM THE FLY. Who or what has influenced your writing style and sense of humor?

Growing up I was a huge fan of Monty Python, Woody Allen and Douglas Adams. I love things that are bizarrely comic and absurd.

7. Can you share with us something you tried to do for a crush that did not go the way you wanted it to?

As a teenager, I was too afraid to do anything for a crush except long for them from afar. I sort of stumbled upon my first serious girlfriend only because she was eavesdropping on a conversation I was having with a friend. She thought I was very funny then had her friend tell me she liked me (it’s so strange how these things work in middle school and high school – imagine if we approached things like that as adults. “So and so in the creative department likes you. But only if you like her. What should I tell her?”)

8. If you could ask yourself any interview question, what would it be and how would you answer?

That’s a great question! I think would ask myself that very same question if I had the chance. And then I’d answer it just like this.

-
If that last question and answer was any indication of the sort of humor that Don possesses and is prevalent in Swim the Fly, then I'm sure lots of people are going to enjoy it immensely. To win a copy of Swim the Fly, leave a comment with your email address and an answer to the following question:
What is the most outrageous thing that you would do in order to win the heart of your crush?
For extra entries:
+1 if you follow me
+1 if you post about this interview and giveaway elsewhere (sidebars are fine)
+1 if you add me to your blogroll
+1 if you comment on my review of Swim the Fly here
No need for separate comments per entry. Only comments that contain the answer to the question will count! This contest is open to residents of U.S. and Canada only (sorry, but the book is coming directly from Don himself). It will run until Friday, April 17.
And while you're at it celebrating the upcoming release of Swim the Fly (April 14), do check out Don's website. You won't be disappointed. He's rather entertaining, to say the least. :)
Posted by Steph Su at 11:46 AM