Review: The Plague by Joanne Dahme 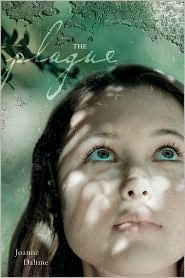 Publication date: May 4, 2009
Tags: YA, historical fiction, Medieval England, sorcery
Rating: 2 out of 5
Summary
Fourteenth-century Europe is ridden with the plague, monstrous black rats roaming everywhere. The English Plantagenet princess Joan is heading to Spain to marry Prince Pedro in an alliance that will give more power to the English king. However, the plague ravages the betrothal ship, leaving Princess Joan dead and her lookalike servant, Nell, and Nell’s little brother, George, alive.
Joan’s brother, the malevolent Black Prince, forces Nell to act the role of the princess and carry on with the marriage. It’s up to a ragtag group of people to help Nell and George escape from the Black Prince, but how can Nell know who to really trust? And with an army of rats and a crown to the Black Prince’s name, how can Nell survive the throes of his black-hearted ambitions?
Review
THE PLAGUE was a decisively odd and unsatisfying read. I had expected a grand and exciting adventure full of so much danger you couldn’t possibly flip a page without encountering it. However, this book was slow, disjointed, and inconclusive. I never got a sense for any of the characters, most of whom seemed to pop in and out of the story arbitrarily, their backstories and motivations unexplained. The Black Prince was a too perfect villain, with consistently evil actions and a predictable ending.
My favorite character was little George, a naively optimistic and trusting boy who helps heal the afflicted and has not yet realized how dangerous the world is. Other than that, however, I felt no connection to this book at all.

Writing: 3/5
Characters: 2/5
Plot: 2/5
Overall Rating: 2 out of 5
Cover discussion: 3 out of 5 - The cover was what attracted me to this book in the first place. There's just something very intriguing about the fresh-faced model, her face dappled with sunlight. I also like how the green of her eyes matches the background. (Of course, the cover has nothing to do with the story itself. Alas.)
Posted by Steph Su at 11:11 PM