Another three-parter WoW post because all of a sudden I'm stumbling across so many brilliant sounding reads that I want to share them with you all!

Beautiful Creatures by Kami Garcia and Margaret Stohl
There were no surprises in Gatlin County. We were pretty much the epicenter of the middle of nowhere. At least, that’s what I thought. Turns out, I couldn’t have been more wrong. There was a curse. There was a girl. And in the end, there was a grave.
Lena Duchannes is unlike anyone the small Southern town of Gatlin has ever seen, and she’s struggling to conceal her power, and a curse that has haunted her family for generations. But even within the overgrown gardens, murky swamps, and crumbling graveyards of the forgotten South, a secret cannot stay hidden forever.
Ethan Wate, who has been counting the months until he can escape from Gatlin, is haunted by dreams of a beautiful girl he has never met. When Lena moves into the town’s oldest and most infamous plantation, Ethan is inexplicably drawn to her and determined to uncover the connection between them.
In a town with no surprises, one secret could change everything.
Can we just say that if you are not immediately attracted to the stunning cover, then the mysterious synopsis should attract you? I love books where the characters or locations have mysterious histories abound with the paranormal. And there seems to be a strong love interest. Plus, people like Vania and Karin keep on raving about this book on Twitter and Goodreads, pretty much driving me mad with anticipation. And Kami and Margaret are very active on their blogs and on Twitter, which builds up the exictement even more. It sounds like it's gonna be great!
Beautiful Creatures will be released in hardcover by Little, Brown on December 1, 2009. 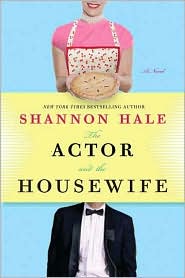 The Actor and the Housewife by Shannon Hale
What if you were to meet the number-one person on your laminated list—you know, that list you joke about with your significant other about which five celebrities you’d be allowed to run off with if ever given the chance? And of course since it’ll never happen it doesn’t matter…
Mormon housewife Becky Jack is seven months pregnant with her fourth child when she meets celebrity hearththrob Felix Callahan. Twelve hours, one elevator ride, and one alcohol-free dinner later, something has happened…though nothing has happened. It isn’t sexual. It isn’t even quite love. But a month later Felix shows up in Salt Lake City to visit and before they know what’s hit them, Felix and Becky are best friends. Really. Becky’s husband is pretty cool about it. Her children roll their eyes. Her neighbors gossip endlessly. But Felix and Becky have something special…something unusual, something completely impossible to sustain. Or is it?
A magical story, The Actor and the Housewife explores what could happen when your not-so-secret celebrity crush walks right into real life and changes everything.
Shannon Hale is one of my favorite authors and she can clearly do no wrong. I very much enjoyed her previous adult novel, Austenland, and so am looking forward to reading this one!
The Actor and the Housewife will be available from Bloomsbury on June 9, 2009.
And finally, I don't like to post WoW choices if they don't have a cover, but I really really really couldn't resist this one, because this just might be the most highly anticipated book on my list for the next few years. From Megan McCafferty's website:
Bumped by Megan McCafferty
Alessandra Balzer at Balzer & Bray/HarperCollins Children’s Books acquired World English rights to New York Times bestselling author Megan McCafferty’s new novel in a two-book deal from Heather Schroder at ICM. Bumped is a sharply funny and provocative dystopian novel set in a world where only teens are able to have babies, and are contracted by adults to carry them to term. Megan is best known for her Jessica Darling series, which started with Sloppy Firsts and most recently ended with Perfect Fifths.
Can we say, "Holy....!"? Megan's gone dystopian lit! This is going to be awesome. I have no doubt that she'll conquer this new genre the same way she redefined chick lit/YA lit with the Jessica Darling series.
Posted by Steph Su at 3:47 PM