In My Mailbox is a weekly meme inspired by Alea and hosted by Kristi. Check out Kristi's post to see what others got in books this week!

These are two weeks' worth, not including books I got from BEA.

Jessica's life seemed difficult enough since the sudden loss of her mother, but meeting Pietr Rusakova turns her world upside down again. The newest member of Junction High, Pietr is a first generation Russian-American, a fact that by itself makes him different enough to get lots of attention in the small town. But Pietr is far more than good looks and an interesting accent, Pietr has secrets to hide-secrets including dramatic changes he's undergoing that will surely end his life early. Secrets dating back to the Cold War get the better of Jessica's curiosity, leading her into an exciting and dangerous world where her understanding of reality and what makes a man or a monster will be challenged.

Really looking forward to this one! It's a smooth finished copy as well. 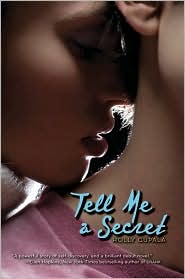 In the five years since her bad-girl sister Xanda’s death, Miranda Mathison has wondered about the secret her sister took to the grave, and what really happened the night she died. Now, just as Miranda is on the cusp of her dreams—a best friend to unlock her sister’s world, a ticket to art school, and a boyfriend to fly her away from it all—Miranda has a secret all her own.

Then two lines on a pregnancy test confirm her worst fears. Stripped of her former life, Miranda must make a choice with tremendous consequences and finally face her sister’s demons and her own.

In this powerful debut novel, stunning new talent Holly Cupala illuminates the dark struggle of a girl who must let go of her past to find a way into her own future.

I finished this one, like, the very night I got it, and it is so, so good. Holly Cupala is a serious new talent in YA. Thanks, Holly! 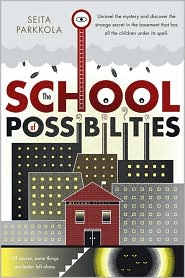 The School of Possibilities by Seita Parkkola
(Sourcebooks Jabberwocky / June 1, 2010)

Storm Steele is an impossible child.

Or so his parents believe, thanks to the influence of his evil “step-monster.” Now Storm is being forced to attend the School of Possibilities for troubled youth. But Storm notices that something strange is going on at his new school. The students are not…normal.

Soon he’s being spied on, followed by classmates—and worst of all, forced to accept the headmaster’s perfectly behaved daughter as his girlfriend. He can feel himself becoming more obedient, more like his classmates. Storm tries to resist, but he doesn’t understand how or why the school is controlling him.

Can Storm escape—or will he be turned into a zombie of “good” behavior like everyone else around him? 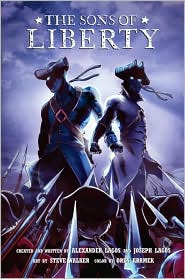 Forget everything you thought you knew about America's early days-history packs a punch in this full-color, two-fisted, edge-of-your-seat adventure!

Graphic novels are a revolution in literature, and The Sons of Liberty is a graphic novel like no other. Visual and visceral, fusing historical fiction and superhero action, this is a tale with broad appeal-for younger readers who enjoy an exciting war story, for teenagers asking hard questions about American history, for adult fans of comic books, for anyone seeking stories of African American interest, and for reluctant readers young and old.

In Colonial America, Graham and Brody are slaves on the run-until they gain extraordinary powers. At first they keep a low profile. But their mentor has another idea-one that involves the African martial art dambe . . . and masks.

With its vile villains, electrifying action, and riveting suspense, The Sons of Liberty casts new light on the faces and events of pre-Revolution America, including Ben Franklin and the French and Indian War. American history has rarely been this compelling-and it's never looked this good.

I'd be interested to see this graphic novel take on American history. 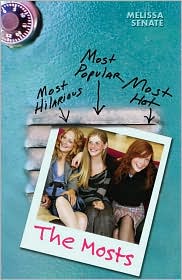 Madeline finished freshman year at Freeport Academy just as invisible as when she started. But after a summer in Italy with her sophisticated aunt, she returned as a sophomore with cool clothes, European attitude, and a hot new boyfriend, Thom.

Maddie's part of the in crowd . . . the Mosts. Her best friend, Caro? Most Beautiful. Her other friends, Fergie, Annie, and Selena? Most Stylish, Most Hilarious, and Most Hot, respectively. And Madeline? Most Popular. Her life is great.

Believe it or not, I'm actually really intrigued by this one. I read Theodora Twist many years ago and remembered it being a quick and easy fun read, so I'm going to have with this one as well!

Of course, there is a great grammatical error on the cover... Intentional? Maybe. But still inexcusable. *grammar Nazi call-out*

From the Teen Author Carnival: 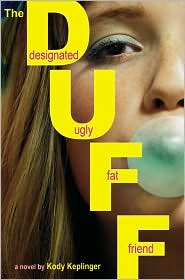 Seventeen-year-old Bianca Piper is cynical and loyal, and she doesn't think she's the prettiest of her friends by a long shot. She's also way too smart to fall for the charms of man-slut and slimy school hottie Wesley Rush. In fact, Bianca hates him. And when he nicknames her "Duffy," she throws her Coke in his face.

But things aren't so great at home right now. Desperate for a distraction, Bianca ends up kissing Wesley. And likes it. Eager for escape, she throws herself into a closeted enemies-with-benefits relationship with Wesley.

Until it all goes horribly awry. It turns out that Wesley isn't such a bad listener, and his life is pretty screwed up, too. Suddenly Bianca realizes with absolute horror that she's falling for the guy she thought she hated more than anyone.

This book was really, really good! You should definitely check it out come the fall (unless you have delicate eyes and sensibilities, in which case you should not). Kody Keplinger has serious cojones and I want her next book NAO!

[no official cover yet, but the one on the ARC is really pretty!]

Things in Delilah Hannaford’s life have a tendency to fall apart. She used to be a good student, but she can’t seem to keep it together anymore. Her friends are drifting away. Her “boyfriend” isn’t a boyfriend. Her mother refuses to discuss the fight that divided the Hannaford family eight years ago. Falling apart, it seems, runs in the family.

When Delilah must spend the summer helping to settle her estranged grandmother’s estate, she’s suddenly confronted by her family’s painful past. Faced with questions that cannot be ignored and secrets that threaten to burst free, Delilah begins to doubt all that she’s ever known to be true.

Rich with humor and emotion, Sarah Ockler delivers a powerful story of family, love, and self-discovery—as Delilah comes to question whether even the most shattered relationships can be pieced back together again.

I enjoyed Sarah's debut, Twenty Boy Summer, a lot last year, so I'm really excited about this one! Plus, Sarah is incredibly sweet and a wonderful person.


The Demon's Covenant by Sarah Rees Brennan (US & UK - couldn't resist)
My Ridiculous, Romantic Obsessions by Becca Wilhite
A Matter of Magic by Patricia Wrede
The Jaguar Stones, Book One: Middleworld (ARC) by J & P Voelkel
The Sorcerer of Sainte Felice (ARC) by Ann Finnin
When I Was Joe (ARC) by Keren David
Once (ARC) by Morris Gleitzman

The above were bought at the Strand the day of the Teen Author Carnival. They're pictured in the BEA books pictures in the BEA post. Once was recommended by the lovely Sarah Darer Littman!

As You Wish by Jackson Pearce
Chronicles of Nick, Book 1: Infinity by Sherrilyn Kenyon

Swapped:
Along for the Ride by Sarah Dessen
The Morganville Vampires Books 1, 3-6 by Rachel Caine (finished book 1 and am addictedddd already)
Hearts at Stake by Alyxandra Harvey
Her Notorious Viscount by Jenna Peterson
Fire Study by Maria Snyder
Patient Zero by Jonathan Maberry