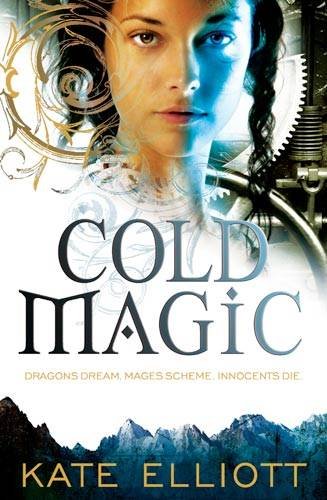 'I was not a bard or a djeli or an historian or a scribe and I was certainly not a sage, but that didn't mean I wasn't curious ...'

As they approach adulthood, Cat Barahal and her cousin Bee think they understand the society they live in and their place within it. At a select academy they study new airship technologies and the dawning Industrial Revolution, but magical forces still rule. Drawn into a labyrinth of politics involving blood and old feuds, Cat is betrayed by her family and forced to marry a powerful Cold Mage. As she is carried away to live a new life, drawn into a labyrinth of politics involving blood, betrayal and old feuds, she will be forced to make an unexpected and perilous journey in order to discover the truth, not just about her own family but about an ancient secret lying at the heart of her world. [summary from Goodreads and PaperbackSwap]

Can I first say that if Orbit continues to come out with ever stunning covers, my wallet will NOT be happy with me? Anyway, this one sounds epic and potentially very enthralling. Magic, arranged marriages, betrayals, political conspiracy... maybe even a little steampunk? Sounds like it can be fantastic!

Cold Magic will be published in paperback by Orbit on September 9, 2010.


What are YOU waiting for this Wednesday?
Posted by Steph Su at 9:32 AM