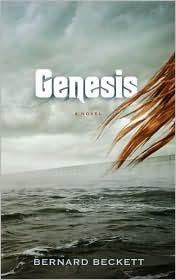 Tags: YA, dystopian lit, artificial intelligence
Rating: 4.5 out of 5
Summary
In Plato’s Republic, an island nation in the future where no one from the outside is allowed in, Anaximander begins her four-hour-long examination for entrance into The Academy. She has researched the life of Adam Forde, a well-known soldier who made history when he rescued an outsider girl from the sea and changed the course of the Republic forever.
As Anax tells the Examiners what she knows about Adam’s life and the subsequent events that followed, she begins to question the existence of humanity, the purpose of the Republic, and the safety of her own future, ultimately making a discovery that turns her life—and the readers—upside down for a shocking conclusion.
Review
How can I describe GENESIS in a way that will do it justice? It’s a chilling piece of dystopian literature, a psychological thriller that terrifies even though it takes place entirely in a four-hour-long conversation. It’s not light reading, for sure, and will force you to think long and hard about it days after you’ve finished the book.
On that note, though, I think that all the time you’ll have to put into thinking about this book and the issues it raises is completely worth it. There are long conversations that delve into questions of the worth of humanity and the dangers—and advantages—of artificial intelligence. The ending in particular was so unexpected, so original and yet so appropriate that once you’ve read it you can think of no other way to end the book. I would read this book again and again just to understand the circumstances that led up to the fascinating ending, an ending that will stay with you forever.
All in all, don’t miss GENESIS. It’s not a typical young adult read, that’s for sure, and will be difficult for many people to comprehend, but if you put the effort into it, trust me, it will be very worth it.

Similar Authors
George Orwell (1984)
M. T. Anderson (The Astonishing Life of Octavian Nothing)
Writing: 5/5
Characters: 4/5
Plot: 5/5
Overall Rating: 4.5 out of 5
Cover discussion: 3.5 out of 5 - Well... I don't dislike it. And I really like its ambiguity; it fits well with the ending of this book. And I like the bland grayness of everything else: the water, the sky. It hints to the discussions on artificial intelligence, as well as the terrifying nature of the Republic. Okay... I guess I like it quite a bit. :D
Posted by Steph Su at 7:51 PM