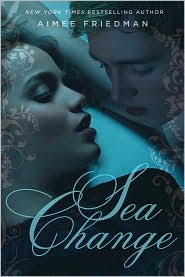 Publication date: June 1, 2009
Tags: YA, summer, romance, mermaids, mystery
Rating: 3.5 out of 5
Summary
Miranda has spent her whole life among science experiments and cold hard facts. So an unexpected summer at the Selkie Island mansion that her mother inherited after the death of Grandmother Isadora throws Miranda for a huge loop. Selkie Island is engulfed with mists of mystery, legends of alluring sea creatures and mermaids that spend their lives half-in, half-out of the water. It is also an island of old-fashioned Southern manners and beliefs, things that Miranda, born and raised in Brooklyn, can hardly believe are part of her legacy.
Miranda’s newfound summer gentile friends urge her to become an item with T.J., a respectable and handsome young man from an equally privileged Southern family. However, Miranda finds herself more and more attracted to a mysterious island native, Leo, whom she can’t help but associate with Selkie Island’s legends of mermaids and mermen. The question, though, is not whether Leo is indeed one of the mystical creatures, but how much self-conscious Miranda is willing to risk for her happiness.
Review
In SEA CHANGE, Aimee Friedman has written an uplifting and magical summer read. This book has all the elements that a summer book demands: an exotic setting, secrets, multiple love interests, stormy emotions, and magical mystique. Selkie Island, with its variety of characters—from the friendly fishermen in the natives’ village to the status-obsessed rich summer vacationers who are Miranda’s neighbors—is a locale that has captured my attention and desires.
However, SEA CHANGE is a book that relies mostly on mystery and plot to move along, which explains but cannot be an excuse for the lack of depth in most of the characters. Most notable how abruptly and incompletely Miranda and Leo’s relationship develops. Physical attraction and “perfect” banter does not a believable relationship make, and I definitely felt like I was missing something that connected these two characters with each other.
Similarly, most of the supporting characters also rely on clichés and stereotypes to make their point. I never got a clear picture of Miranda’s island friends, and there were many times when I felt like SEA CHANGE got dangerously close to the line between sweet, feel-good read and cliché-ridden summer-mystery love story.
Overall, however, SEA CHANGE was still a feel-good read that I greatly enjoyed reading. I would recommend it and its intriguing mysteries as a light read, perfect for a beach or poolside day.
Similar Authors
Judy Blume
Donna Jo Napoli
Cameron Dokey

Writing: 4/5
Characters: 3/5
Plot: 4/5
Overall Rating: 3.5 out of 5
Cover discussion: 4 out of 5 - Okay, so I don't think the cover has anything to do with what actually happens in the book, but I still really like it. I love the blue tones, and there's an almost ethereal quality to the models that lends itself well to the magic and mystery of SEA CHANGE. Well done!
And a huge thank you to Aimee and Sheila Marie at Scholastic for sending me a review copy!
Posted by Steph Su at 9:55 AM

Email ThisBlogThis!Share to TwitterShare to FacebookShare to Pinterest
Labels: 3.5, aimee friedman, review, YA