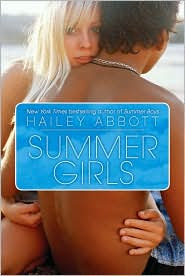 Tags: YA, summer, series, boys
Rating: 2.5 out of 5
Summary
In Pebble Beach, Maine, summer is about to get hot and nasty. Jessica, the All-American athlete with the killer body, has set her eyes on Liam, the local playboy, and is willing to do anything to get to him—including getting information out of his younger brother, Connor.
Jessica’s cousin, the glam New York fashionista Greer, arrives in Pebble Beach reluctantly while her parents are in the midst of a divorce, but perks up when she’s challenged to win the heart of Brady, who sees past her airs and looks. However, Brady has an ex-girlfriend who is just a step short of Satan’s spawn…
And finally, Lara, whose mom has just recently married Jessica’s uncle, is surprised when she falls for a wonderful guy on the first day of summer. It could be the perfect romance…except for one tiny little fact: Drew is Jessica’s older brother, and thus her cousin. How will the summer turn out for the three girls?
Review
Let’s just say off the bat that I don’t like this type of book and therefore found it extremely difficult to find merit with it. I prefer to read literature that’s slightly more intellectual than describing the boys as “Abercrombie-hot” and throwing out a bunch of classy brand names to describe a girl’s wardrobe. SUMMER GIRLS has both of those and more. The characters are all “types”: the sporty-hot chick, the glam-hot chick, the offbeat-hot chick, the playboy-hot guy, the sporty-hot guy, the wholesome-boy-next-door-hot guy…have I been clear enough yet?
I don’t even mind character types as long as they are done well, as long as we can put ourselves in their shoes and see where they are coming from in their thoughts and actions. But you don’t really get to do that with SUMMER GIRLS. Individually I can believe each of these girls’ stories and maybe even enjoy them, but when you throw them together and insist that they go from practically strangers to BFFs in the course of several very turbulent weeks without adequately exploring the dynamics of their friendships and family, well, I have a problem. It’s as if the author decided that the three girls would have their separate plotlines, but they had to converge somehow, so—boom!—they live together. Uh, okay? And then what happens? There is so much more that happens when three almost-strangers live together than what is portrayed in this book.
Still, the summer is coming up, and Hailey Abbott’s series has done well in years past. SUMMER GIRLS will find its audience in the hordes of preteen girls who want to live vicariously—read: have random hookups, get their hearts broken by summer flings, and wrap everything up neatly at the end of the season—while in reality they’re stuck on an unexciting beach with their unexciting, same-old, same-old family.

Email ThisBlogThis!Share to TwitterShare to FacebookShare to Pinterest
Labels: 2.5, hailey abbott, review, YA