This is a triple-book WoW post because otherwise I will never remember to share them all with you!

The Uninvited by Tim Wynne-Jones
Mimi Shapiro had a disturbing freshman year at NYU, thanks to a foolish affair with a professor who still haunts her caller ID. So when her artist father, Marc, offers the use of his remote Canadian cottage, she’s glad to hop in her Mini Cooper and drive up north. The house is fairy-tale quaint, and the key is hidden right where her dad said it would be, so she’s shocked to find someone already living there — Jay, a young musician, who is equally startled to meet Mimi and immediately accuses her of leaving strange and threatening tokens inside: a dead bird, a snakeskin, a cricket sound track embedded in his latest composition.
But Mimi has just arrived, so who is responsible? And more alarmingly, what does the intruder want? Part gripping thriller, part family drama, this fast-paced novel plays out in alternating viewpoints, in a pastoral setting that is evocative and eerie — a mysterious character in its own right.
Kirkus Reviews says that it's not a supernatural thriller but rather a suspenseful family drama, but hey! It sounds good. A fairy tale-esque setting, three siblings who didn't know one another, a mysterious threatening presence... count me in for this one.
The Uninvited will be released in hardcover by Candlewick Press on May 12, 2009. 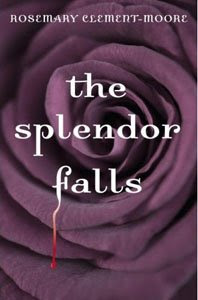 The Splendor Falls by Rosemary Clement-Moore
Sylvie's father's cousin is restoring a family home in a town rich with her family's history. And that's where things start to get shady. As it turns out, her family has a lot more history than Sylvie ever knew. More unnerving, though, are the two guys that she can't stop thinking about. Shawn Maddox, the resident golden boy, is the expected choice. Expected and presumed by everyone. But Rhys--a handsome, mysterious foreign guest of her cousin's--has a hold on her that she doesn't quite understand.

Then Sylvie starts seeing things. A girl down by the lake. A man peering into the window. And a graveyard with an oddly placed headstone.

A modern gothic romance set in the South, Rosemary Clement-Moore has created a heroine who will steal your heart, a house that will haunt you, and a love story that will leave you breathless.
I absolutely love Rosemary Clement-Moore's Maggie Quinn: Girl vs Evil series (as you will be able to see in a few days), and so I'm excited to see what she has in store next. This seems like something very different from the Maggie Quinn books, but I'd be interested in seeing whether or not Rosemary's sense of writing humor (wit! quips! snark!) appears in this book as well. The description and the cover seem a lot more somber than her previous books... but I hope Sylvie is also an intelligent and witty character!
The Splendor Falls will be released in hardcover by Random House on September 8, 2009. 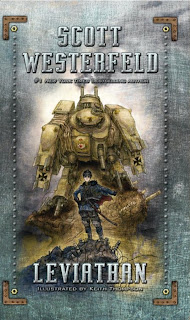 Leviathan by Scott Westerfeld
So I couldn't find an official description yet, but Wikipedia says, "It is the first in a young adult fiction trilogy set in an alternate-history World War I involving living airships, and the main character will be the teenage son of Archduke Franz Ferdinand of Austria, and his love interest will be a cross-dressing Scottish girl." Wow-za! And if it's written by Scott Westerfeld of course it's going to be good, the man's a genius or something close to that. Plus, the cover looks ridiculous! Reminds me of old-school robot anime (and here I show the years' of influence my brothers have had on me).
I also like/dislike how Scott put a picture of all his ARCs up on his blog and the picture looks something like this:

Well then! Oh, author-taunt humor. It's the greatest. They (the ARCs) look incredible, even just from their spines. :) I wonder what's the chance of me getting an ARC of ANY of these books? Sigh.
Leviathan is being released by Simon & Schuster in October 2009.
Posted by Steph Su at 10:22 AM