Review: The Innocent by Posie Graeme-Evans 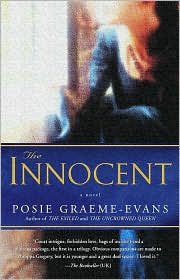 Book One of the Anne Trilogy
Tags: adult, historical romance, Edwardian England
Rating: 3.5 out of 5
Summary
In politically uncertain 15th-century England, a baby girl is born, against all the forces that have tried to destroy her and her mother. The younger mother dies, but the girl, Anne, survives, and is taken in by a foster mother, Deborah, and taught ways with healing herbs and concoctions.
When Anne is fifteen, she arrives in London to work as a servant at the merchant Mathew Cuttifer’s house. London is full of not-so-nice characters, and Anne is made to feel ever more aware of her femininity and precarious position in society. Anne’s life quickly spirals into danger when, as the queen’s body servant, she catches the eye—and heart—of King Edward, a handsome, passionate, but dangerous young man. She also learns the terrifying truth about her lineage, a truth that could spell disaster for her and her friends. In the political upheavals of the time, how can Anne stay true to herself, she wants to be with her love the king even though she knows that’s impossible?
Review
First and foremost, don’t read this book expecting historical accuracy, for if you do, you’ll be sorely disappointed. That being said, THE INNOCENT is a twisting, bosom-heaving, emotional, gasping historical fiction read! The author gorgeously places us into the heads of all the characters, however minor, so that we are able to get a sense of their thoughts and feelings, their conflicts and uncertainties. I don’t know much at all about Medieval England, but I am far from disappointed here: our closeness to the characters makes for an extremely believable court intrigue, a space full of secrets, hidden desires, backstabbing, and political unrest…delicious!
However, I was most bothered by some of the characters and their relationships with one another. The protagonist, Anne, was just too perfect, the perfectly helpless damsel in distress whose occasional bursts of confidence and assuredness seemed fake in light of her more consistent ability to not have a spine. I couldn’t believe that her breathtaking beauty could really sustain everyone’s interest in her for prolonged periods of time.
Similarly, I found the romance between Anne and King Edward unrealistic. Their eyes meet, they take in each other’s beauties…and then they’re forever obsessed with each other? I got no inkling of the chemistry between them, just an unfathomable draw of—what, hormones? Pheromones?—driving them together in spite of everything.
Despite those issues I have with the book, I’d still recommend THE INNOCENT to a variety of readers. Even if you don’t know or often read books about Medieval England, Posie Graeme-Evans’ writing ability is still something to take note of. You will be sucked into the characters’ stories, and only unwillingly will you put the book down.