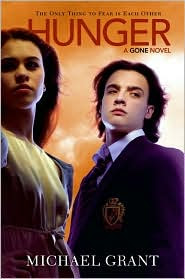 Book Two of the Gone series (Gone review here)
Publication date: May 26, 2009
Tags: YA, dystopia, horror, supernatural, thriller
Rating: 5 out of 5
Summary
The FAYZ is a twenty-mile-diameter zone where all people over 15 years old have disappeared. It’s been three months since the infamous Thanksgiving Day battle in Perdido Beach that involved the townies, the prep kids at troubled Coates Academy, and some other terrifying creatures—such as talking coyotes—and superpowers—like levitation, firepower, and more. Food is running out in the FAYZ, and kids are losing their once steady resolve to stay humane.
There is a divide growing between the “freaks” (those with the superpowers) and the normals, but Sam, the town-declared mayor and overall hero/daddy type, has other worries on his overwhelmed hands as well. Caine and his Coates Academy cronies have something sinister planned…but worse than that is the developing certainty that an indescribable force of evil is behind everything, and will stop at nothing to gain a form.
Review
If you think Michael Grant couldn’t get better than GONE, the first novel in this series, think again and again and again! HUNGER completely blows the first book out of the water in terms of action, suspense, horror, and intrigue. It includes all the positives of GONE—the multicharacter points of view, the supernatural, the killer kids with superpowers—and adds more exciting components.
One of my favorite aspects of the GONE books is their ability to weave an engaging story from multiple characters’ points of view. This allows readers to understand everyone’s motivations and faults, passions and lapses in judgment, for an ultimately more believable and enjoyable reading experience. With the exception of purposely-made-evil villains, it’s easy to picture these characters as simply frightened teenagers thrown into a nightmarish life, every day trying to balance morality with survival.
Of course, the GONE series would not be such a success were it not for its elaborate and utterly fascinating plot. It is clear from every chapter that a lot of thought and preparation has gone into this series. Fans of Harry Potter and TV shows like “Lost” will be able to enjoy GONE and HUNGER’s complexity, subplots, supernatural elements, and budding romances. Basically, this series has everything, and each book’s 500+ pages will pass by in an all-too-fast flash that will leave your palms sweating, your heart racing, and your mind hungering for more from this talented author.
Similar Authors
William Golding (Lord of the Flies)
Suzanne Collins (The Hunger Games)
J. K. Rowling (Harry Potter)
Writing: 5/5
Characters: 5/5
Plot: 5/5
Overall Rating: 5 out of 5
Cover discussion: 3.5 out of 5 - If I had to guess what the cover designers were going for, the two models would represent Caine and Diana, which wouldn't be too bad of a fit. However, I most like the orange tint of this cover. If the rest of the series continues in this manner, there'll be a plethora of rainbow-colored spines on my bookshelf!
Posted by Steph Su at 5:39 PM