Review: The DUFF by Kody Keplinger 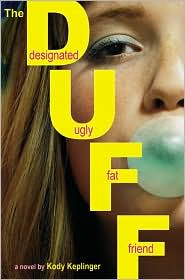 When the world’s greatest womanizing jerk, Wesley Rush, calls cynical Bianca Piper the Duff (designated ugly fat friend), the term haunts her day and night. Next to her gorgeous best friends, she is a nobody. Add to that her parents’ crumbling marriage, and Bianca desperately needs something to distract her.

So she kisses Wesley. And then they continue hooking up.

Bianca wants to keep this a strictly noncommittal physical thing, but nothing prepares her for what happens next: the emotional connection she never in a million years wanted to make with Wesley.

Enter The Book for the new generation of teens: Kody Keplinger’s strikingly smart debut THE DUFF. Conservative and prudish adults will most definitely try to ban this book, but teenagers will snatch this sexy and edgy debut right up for its relatable, modern protagonist and spot-on dialogue.

Fans of “traditional,” brushed-up YA literature beware: you are not going to like Bianca. She is loud, angry, spiteful, cynical…and as a result, she will be welcomed with loving arms by today’s teenagers. Bianca is what’s missing in literature and probably desperately sought after by teens, a sort of Holden Caulfield for this generation. She has no illusions about “true luv” teen romance; instead, her concerns are grounded in the reality of family tensions, arguments with friends, and wavering self-esteem.

While Bianca’s aggression and cynicism may grate on many readers’ sensitivities (including, occasionally, mine), I was still able to see where she was coming from. We need to dispense with our illusion of teen girls as virginal, hopelessly romantic, and sweet-sixteen-and-never-been-kissed, because the truth is that there are a lot more girls out there like Bianca than we care to admit, and they will jump at this relatable book.

The other characters in THE DUFF are nicely three-dimensional too, despite the fact that their problems occasionally seem a little too convenient and piled-on for plot’s sake. Bianca’s feisty hot-and-cold relationship with Wesley, in particular, is smoldering. Their initial coming together was a bit rough—I had some trouble believing that something like this would happen—but once they got going, boy, did they get going. And not just in sexual terms, either (though there is plenty of that, so if you’re uncomfortable with sex in literature, go somewhere else). Gone is the age-old idea that teen romance should consist of sweet heroines and reformed bad-boy love interests. In THE DUFF, Bianca and Wesley are constantly at odds with one another, and Bianca is not afraid to yell at him and say what she thinks. Even if this type of romance is not exactly the best model (though neither is the passive female/bad-boy male one), it makes for one heck of an exciting read.

THE DUFF reminds me of why romantic “screwball” comedies can be so great: for the characters’ chemistry and the sharp dialogue. It’s wish fulfillment to an extent (how I sometimes wish I could get away with Bianca’s cynicism and attract a jerk-turned-sweetie like Wesley), but it’s also highly relatable, and I have no doubt that there will be a legion of girls out there who can see parts of themselves in Bianca. I can’t wait to see what Kody Keplinger has for us next!


Cover discussion: 4 out of 5 - I like it a decent amount. It's big, it's bold, and it's in your face. There have been complaints that the Bianca model on the cover is too pretty to be the DUFF, but the thing with being the DUFF is that everyone feels like the DUFF every once in a while, so it's not like Bianca is supposed to be exceptionally hideous or anything. She is, in fact, an average girl with average insecurities about her looks.

ARC received at the Teen Author Carnival in May!
Posted by Steph Su at 11:21 AM

Email ThisBlogThis!Share to TwitterShare to FacebookShare to Pinterest
Labels: 4.5, kody keplinger, review, YA