What Makes a Good Reviewer? 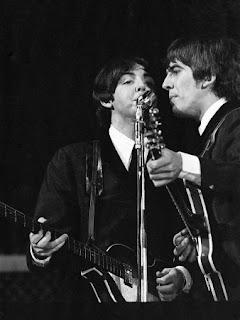 The answer to that question is probably best said by a classmate of mine, an extremely talented girl a year younger than me. She's talking about music journalism here, but I think it's so applicable to any other type of writing, particularly reviews:


"The mark of a good music critic is the ability to describe a piece of music so that a listener who has not heard the song can hear exactly what the writer is hearing. It's impossible, but what else can I do but try?

"I love 'Rocky Raccoon' because it's imperfect and atypical. I like it because Paul McCartney's mouth is too close to the microphone, and you can hear him swallowing. His diction isn't very good, and the words seem to roll off his tongue, not quite making it over the edge. The melody is simple, and the lyrics are effortless. Paul's crooning tone adds vulnerability to the song, but the smoothness of the lyrics and the languorous movement of Ringo's downbeat and George's strumming guitar give the tune a lighthearted ambiance." © I.N. 2010

If you can't hear exactly what she's talking about in her description, then pigs are probably flying. I've never heard this song before but I can practically hear it playing right next to me, reading that.

This, friends, is what it means to be a reviewer, or really, a writer of anything. It's describing something in such a way that someone who has no expertise in the subject can almost perfectly understand what you're talking about.

Don't get me wrong: it's definitely hard. It takes lots of practice and direct/indirect exposure to the field that you're writing about and lots of trial and error. As well as a bit of talent. Yes, I believe that people are born and/or shaped to be predisposed to some activities and interests over others, but even that's not enough to be good at what you're doing. It also involves a certain degree of humility, of actually LISTENING to criticism and learning from it, and then learning to separate the good criticism from the so-so criticism.

The way I see it, to write--to transfer anything from thought to language--is to communicate. Doesn't matter if you're only scribbling half-formed sentences in your journal, or drafting an article that's going to appear in the New York Times. They might be different levels of writing, but it's all writing when it comes down to it. To write is to communicate, which means to have an audience. And by "audience," I mean anything from a half-second, grimacing glance before you trash/burn/otherwise destroy what you just wrote, or the legions of readers who will discover and rediscover your writing for centuries to come.

The easiest audience to write for is, arguably, yourself. That's because you know yourself, you can take shortcuts with your writing and still be able to decipher what you are talking about. The more people read your stuff, however, the harder it is to write, and the less easy it is to define the qualities of a work that make people continue to read it generations after it was originally written. What is the reason Homer is still read and taught today? What about Lao Tzu and Sun Tzu, who actually wrote in another language? What is it about their writings that have withstood the tests of time, evolving audiences, and even languages?

Here we go back to that intangible definition of writing that transcends individual language and experiential limitations. As a book reviewer, I strive to describe the book I'm reviewing to myself... my YA-loving friends... readers in general... non-reviewers... my mother's cousin's husband's sister's youngest son's best friend, who HATES reading. On and on and on, attempting to reach whoever manages to stumble across this speck of a blog in this corner of the infinite Internet universe. With every bit of writing I do, blogging or non-blogging-related, I am thinking about audience. Because, from a sociocultural perspective, in our world, those who have language are those who succeed. Sure, you should definitely write for yourself, all of your writing should reflect YOU, but at the same time, the "you" is a form of audience as well.

Language is a construct to bridge--nay, to organize--human thoughts and consciences. It necessarily requires the existence of an audience. And it is the act of a good writer/reviewer that we are able to communicate our thoughts about something to someone who knows nothing about it. It doesn't matter how the reviewer goes about it: they can be snarky, biting, insulting, raving, obsequious. The attitude with which one reviews something is not what I'm talking about right now (and is subject for a different conversation at another time); what I'm talking about right now is the act of communication. My favorite book reviewers have that ability to let me really get what he/she wants to say about the book. And that's what I'm looking for when it comes to writing.
Posted by Steph Su at 9:50 AM