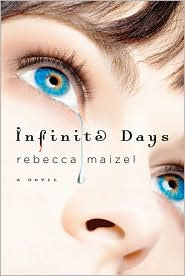 Lenah Beaudonte has been a vampire for half a century, and with the aid of her lover, has managed to become human again, enrolling in a typical New England boarding school and living a typical 16-year-old girl’s life. In between becoming reacquainted with her senses and getting into the swing of 21st-century society, Lenah finds herself drawing closer to Justin Enos, the golden boy of school. But it's not so easy leaving her wicked vampire days behind, and Lenah dreads the day when her old coven that she’d ruled over finds out what she's done and what they will do to her then.

I tried to keep my expectations realistic before going into this book. Just because the premise is a reversal of all other bland vampire romances out there--female vampire turns human again, has human love interest but is conflicted with her loyalty to her own vampire clan--did not necessarily mean it was going to be a groundbreaking and memory tale. And unfortunately, INFINITE DAYS was almost exactly as I'd expected: a lukewarm, tru-luv vampire romance (plus set at a boarding school) that is aimed straight at the Twilight-loving crowd.

Within this YA niche, INFINITE DAYS does some things very well. I enjoyed reading about Lenah's slow adaptation back into the human life, could really understand her as she marveled at physical sensations and the different customs of 21st-century teens. I liked Tony, the Japanese guy who was Lenah's first (and best) friend after she became human again, even though he displayed borderline obsessive-compulsive behaviors sometimes. He had a sort of personality, spunk, and originality that sidekicks in bland paranormal romances always seem to have, making them so much more interesting than the actual love interest. I was even okay with Lenah's aloofness (product of her getting used to her humanness) and people's subsequent fascination with her (she's beautiful and aloof: even I'm mesmerized by girls like her).

However, INFINITE DAYS falls short in other aspects. Justin Enos, the love interest, has no discernible qualities--good or bad--at all, and the only way I can justify his "deep and all-consuming" attraction to Lenah is that she gives off some sort of post-vampirism aura that males are still lured in by. At least Edward Cullen was overly protective and had old-fashioned morals; Justin Enos (whose constant double-name references was obviously an influence of our famous vampire)...was popular? liked racing boats? had a classic *ahem* mean-girl girlfriend? Well, if you think that makes for a wonderful crush...

Furthermore, numerous elements of Lenah's transformation from vampire to human are glossed over in the story. The process by which Lenah became human again is unique and touching, but was just barely given explanation, something that is terribly necessary in speculative fiction. Lenah's rehumanization is inconsistent: she's stumbling, unused to working muscles in one minute, chowing down food like she's done it all her life in the next. I was left feeling unsatisfied with the worldbuilding, which, as it is, seemed like a good placeholder for setting while the story relied too much on our love of insta-luv paranormal romances for its commercial appeal.

Overall, I quickly realized that INFINITE DAYS--and indeed, probably this whole subgenre of YA more generally--is no longer for me. It lacks the thorough development and definition that I crave in my readings. However, readers who are still willing to give alternative vampire stories a try, and who have found themselves greatly enjoying post-Twilight paranormal romances, should keep an eye out for INFINITE DAYS. This will be right up your alley.


Cover discussion: 2 out of 5 - This had never worked for me. Um, yay, unrealistically pretty bright blue eyes? Yeah.... not.

ARC received from LibraryThing's Early Reviewer Program.
Posted by Steph Su at 10:20 AM