Yesterday I went to one of Suzanne Collins' Mockingjay tour stops, at Children's Book World in Haverford. I kind of had to go because, uh, at the midnight release party they threw last month, I nonchalantly threw my name into the raffle they were having, first prize being first place in line to meet Suzanne Collins at her signing. The next day at lunch, I get a phone call along the lines of this:

CBW: Hi, is this Stephanie?

CBW: Hi, this is Children's Book World in Haverford, calling to say... you won the raffle!

CBW: You get to be first in line to meet Suzanne Collins on September 22!

So yesterday, I and my friend whom I had gotten hooked on the trilogy a week before Mockingjay's release date and who came with me to the midnight release party got into my car and drove the half hour or so to Children's Book World. We turned onto the street where the store was located, only to see a sleek black car parked in front, and a familiar wavy blond head getting out of the car and into the store. Suzanne Collins has arrived!

We got there half an hour early, and there was already a dozen or so people in line. So I felt kind of bad mentioning to the store worker that I was the one who won the raffle, and them exclaiming and telling me to stand in front of two middle school boys who looked a little like they had camped out there for days. (Well, okay, not days. Just maybe hours on a hot, humid afternoon.) My friend promptly sat down to do work--such is the life of a Swattie--and I chatted a bit with a grandmother who had been passing by. She was intrigued by the crowd, and after my exuberant praises of the book, called up her granddaughter to see if she had heard of the series and if she'd be interested in getting a signed copy. Turns out that her granddaughter not only read the books already, but she had actually met Suzanne Collins earlier on her tour! I kind of wanted to speak to this 13-year-old girl and be like, YES! YOU ROCK!

A little before 6, they announced that Suzanne Collins was going to read for us! This was unplanned and so I was super excited. We gathered round the little stage inside the store, which was backed by shelves and shelves of Mockingjay: 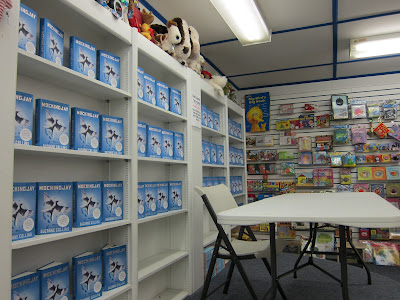 Suzanne then appeared and read from two places: the part in Catching Fire where Katniss talks to Caesar Flickerman in Cinna's dress, and the first chapter of Mockingjay. She read in the voice she hears Katniss speaking to her in, which she describes as a kind of futuristic Appalachian accent. She is a marvelous reader, and I felt almost hypnotized into Katniss' world, and when she spoke in President Snow's words (think high and deceptively soft, like Voldemort) goosebumps burst out all over my arms, it was that eerie. 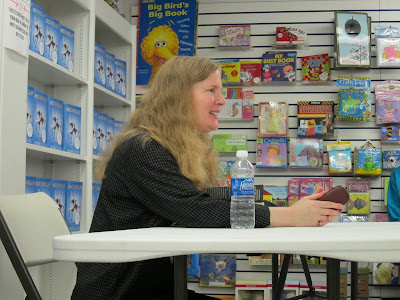 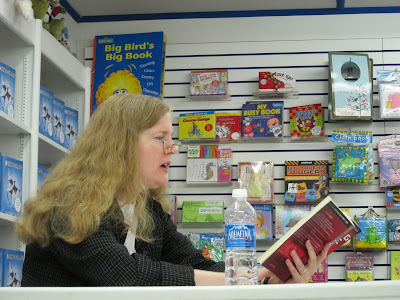 She's super photogenic because she is the embodiment of kindness.

Afterwards we all went back outside the store again and lined up in order. The signing/stamping part went pretty fast, since, well, my friend and I were first. I found I had nothing to say, of course *moron*, but just watched her as she carefully stamped my book and then told the photographer that she'd be able to pose for pictures. So I got pictures! 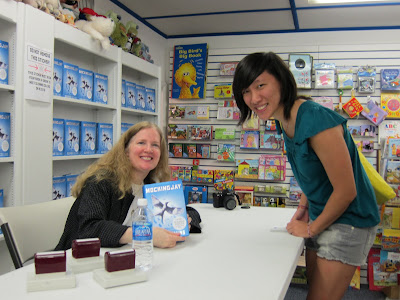 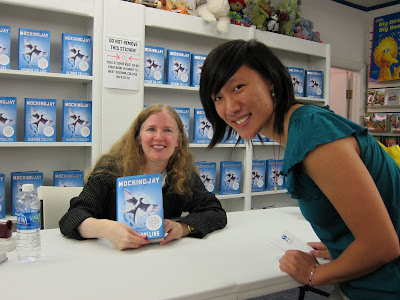 Isn't she wonderful? Sighhhhhh. In the end, I was really happy I went. It was totally worth it to listen to her read.
Posted by Steph Su at 9:00 PM

Email ThisBlogThis!Share to TwitterShare to FacebookShare to Pinterest
Labels: suzanne collins, YA event