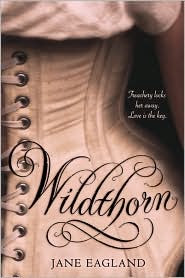 Louisa Cosgrove, the independent daughter of a doctor, believes she is being sent to be a lady’s companion. Instead, the carriage drops her off at Wildthorn Hall, where she is forced to take odd medicines, wear awkward clothes, and subjected to horrifying treatment. At Wildthorn, she is not Louisa Cosgrove, but Lucy Childs, and she has no idea why they call her that.

For Wildthorn is a mental hospital, and Louisa is a patient, though she doesn’t know how or why she is there. As she unravels clues from her past and navigates the psychological horrors of Wildthorn, Louisa fears she will forget who she is…unless she is completely open with herself and actively goes after what she wants.

Fans of Sarah Waters’ Fingersmith will find something similar here in Jane Eagland’s WILDTHORN. Shocking, subtle, and deliberately paced, it will suck in those with patience, who looking for something a bit different from the norm.

It takes no small amount of skill to weave a world that naturally traps the protagonist in unbearable situations. Louisa’s present-tense account of her time at Wildthorn is interspersed with flashbacks to her childhood, in which we get a clear picture of Louisa’s mother and older brother as restraining her identity development. Yet at the same time, her mother and brother are only trying to protect her in the way that most young Victorian women were protected. Their utter belief in their society’s system only more powerfully illuminates the horrifying situations thrust upon many young women.

WILDTHORN moves slowly, as the first half of the book involves numerous flashbacks that set up the situation and characters. However, if you like Victorian literature, and have patience for quiet character-driven stories, then WILDTHORN just might reward you. From an unconventional romance to a shocking setting, this historical novel is full of suspense, horror, and female empowerment.


Cover discussion: 3 out of 5 - It's a pretty generic image of a corset, and I suppose you could read metaphors into the presence of a constraining corset...