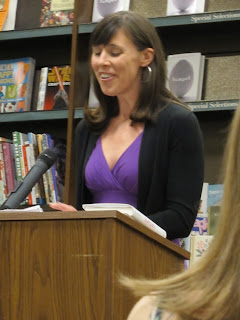 Last Tuesday I had the joy of attending a book launch party for one of my favorite authors: Megan McCafferty! She is the author of the stupendously hilarious and insightful Jessica Darling series, and is now out with a new book, Bumped, a dystopian and her first "official" YA.

Megan's book launch party took place at the Princeton, NJ Barnes & Noble, which is huge and beautiful and stocked full of books and one of the most wonderful chain bookstores I have ever been to. I went there with my school friend Mel, and met up at the signing with Jamie of The Perpetual Page-Turner, Lillie of Alise on Life, Jenna of An Avid Reader's Musings, and Frankie from the First Novels Club.

Megan arrived in a dazzling purple dress and told us about her inspiration for Bumped, which has been "gestating" for three years (I promise I won't repeat any more of her pregnancy puns after that one). Fascinated by our society's, well, fascination with teen pregnancy, what with the high-profile pregnancies of Jamie Lynn Spears and Bristol Palin, and by the successes of reality TV shows such as 16 and Pregnant and Teen Mom (I'm assuming these are TV shows, as I don't actually watch them, but you know which ones I'm talking about), Megan asked herself what could happen if teens were literally encouraged, pushed to get pregnant. 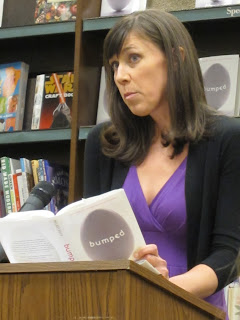 Then Megan read an excerpt from Bumped that was the most exquisite author reading I have ever had the honor of attending. Seriously. This woman should've been an actress. Or been paid to narrate her own audiobooks. She read a club president election scene, which I vaguely remember as chuckle-inducing when I read the book, but in Megan's hands (or mouth, I should say) became a full-blown giggle-fest which then led to some uncontrollable squawks of laughter. If you have the opportunity to hear Megan read, you definitely should.

Afterwards was the signing, which I felt bad about because there was like the six of us bloggers who had been sitting together and we all took a loooong time with Megan. (Granted, half the time she was talking to the B&N lady about how Rick Riordan, who is her adorable son's favorite author, will be stopping by B&N the next Tuesday--ohshitthat'stoday.) Basically, it was great to just kind of bask in her presence, because she is hands-down my favorite author, not to mention a lot of the other bloggers' and my friend's, too. 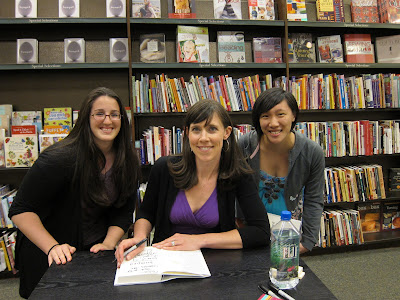 That's my friend and me with Megan. 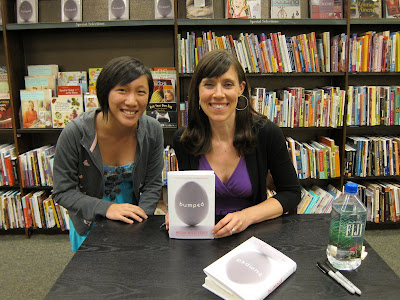 Megan and me. She knew who I was! Ahhhhhhh!

So yeah, the signing was lovely, and I now have an awesome signed copy of Bumped, plus another signed copy that could be yours if you enter my international giveaway by Friday, May 13.

After the signing, the six of us snagged Christi the Teen Librarian and we found TGIF for dinner, which was great because it was bookish with wonderful people. Have you ever realized how much MORE amazing conversations and meals with bookish people are, simply because you have so much in common to talk about? Yeah, I didn't want the night to end, but soon it was time to head back home, and so we parted ways with promises to see one another again. [/end cheesiness]

All in all, it was one of the best nights I've had in a long time, and definitely one of the top ten bookish moments of my life. See Jamie's post and Christi's post for other summaries of the event.
Posted by Steph Su at 9:00 AM

Email ThisBlogThis!Share to TwitterShare to FacebookShare to Pinterest
Labels: megan mccafferty, YA event