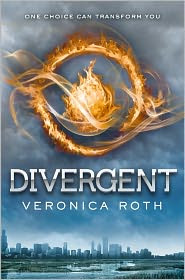 In a future dystopian Chicago, Tris’ society is divided up into five factions: Abnegation (selflessness, and where Tris grew up), Candor (honesty), Erudite (wisdom), Amity (friendliness), and Dauntless (courage). All people in her society must choose which faction they wish to join at the age of 16, and Tris makes a choice that startles everyone, including herself, when she decides to join Dauntless.

But truly being a part of Dauntless is not so easy, as Tris and other initiates must first pass a long and difficult trial that tests their physical, mental, and emotional strength. As Tris makes friends and maybe even falls in love, she also uncovers a burgeoning plot to upset the order of their society, and learns what it truly means to be Dauntless.

Everyone, listen up. The hype for this book? It’s legit. At long last I do think I may have found the book that I will truly encourage fans in Hunger Games deprivation to pick up. DIVERGENT is fast-paced, with a thoroughly developed dystopian world, engaging plot, and an admirable protagonist. In a word, it is excellent.

As soon as Tris chooses to join the Dauntless faction, DIVERGENT becomes an unputdownable read as Tris navigates the often dangerous trials of her initiation period that keep both her and readers on their toes. It’s a classic enough plot structure—the trials that the protagonist must face in order to meet his or her goal—but one that always holds my attention, and Veronica Roth plots the story exceptionally well. When Tris is not learning how to handle weapons that she may have never seen before in her life, she is cautiously navigating her emotional connections with her new friends or nemeses. Physical action blends seamlessly with relationship intrigue to appeal to readers who generally prefer one over the other.

In the midst of all this action, Tris emerges as perhaps the strongest dystopian heroine I have read about since Katniss. All doubts that I may have had about whether or not she truly belongs in Dauntless disappeared only a few chapters in, and from then on I was firmly rooting for her the whole way. While not resourceful, per se (she is in a new faction, after all), Tris has unmatched mental strength, and just a bit too much determination to prove herself, that help carry her triumphantly through obstacles. In short, I like her. I like her I like her I like her. She is just the sort of girl I hope I could be like if, God forbid, I were ever in her situation.

Supporting characters, while nice and attractive, I wish were developed some more, in particularly Cristina, Tris’ closest female friends through the Dauntless initiation. Tris’ love interest is pretty good as far as love interests in YA speculative fiction usually go: he has no need for silly, enigmatic broodfests, and actually likes Tris for her strength and not because of some impenetrable vague reason like insta-luv (this is my interpretation of it, anyway). The ending, unfortunately, felt rushed, and while I don’t disagree with it being a good way for the book to end, it lacked the forceful punch I was looking for, and to which I felt like the rest of the book had been building up.

My minor quibbles with supporting character development and the ending aside, I found DIVERGENT to be an entrancing read throughout. Dystopian? Strong female protagonist? Fast pace? Subtle critiques on our society’s incessant need to label and categorize everything? Read DIVERGENT for all of them. In the meantime, I will be camping outside the nearest bookstore for the next book in this series, thank you very much.


Cover discussion: I like it well enough, and it should be unisex enough to attract both male and female readers. Plus that fiery eye-like thing makes more sense after you read the book. :)

Won on author's blog; another review copy received from publisher.
Posted by Steph Su at 10:10 AM