Review: Shades of Milk and Honey by Mary Robinette Kowal 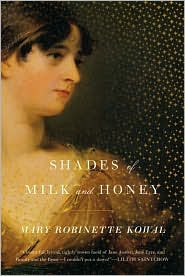 Of the two Ellsworth sisters, the younger, Melody, may be prettier, but it is Jane who has the highly desirable talent of working with glamour, a must for any well-to-do lady in this alternate Regency England. However, Jane feels like she is forced to acquiesce to Melody’s physical superiority, and sit on the sides while Melody flirts with the gentlemen in their social circle: Mr. Dunkirk, their kind and gentle neighbor; Captain Livingston, a childhood friend who has just come home; and Mr. Vincent, an accomplished glamourist hired by the neighbors.

As Jane navigates the everyday life of a respectable woman, she learns more about glamour, people, and herself.

SHADES OF MILK AND HONEY sounded like it was going to be my favorite type of novel. Who can resist a magical version of Regency England? The idea is certainly nothing new in books. However, while I thought SHADES OF MILK AND HONEY captured the language of the time fairly well, it ended up having very little substance to fully ensnare me.

My favorite thing about this book was its language. Kowal’s writing style is very loyal to Austen’s—to the point where it might feel like you know exactly what’s going to happen, because you can find nearly all of the possible plot twists in Austen novels. I enjoy it when the language of a novel feels appropriate to its setting, and SHADES OF MILK AND HONEY did that in my opinion.

I liked the idea of glamour as a quality of feminine status, and enjoyed reading about Jane’s glamour workings, and what exactly it entails for her and her social circle. I couldn’t help but feel, however, that the glamour idea was not as well integrated into the world as it could be. That’s because, when it comes down to it, I feel like this book tries to be no more than a pleasant portrait of life in this alternate-world Regency England, lacking in the memorable characters and social satire and make Austen’s novels so beloved. The characters are either blandly generic (like Jane) or irritatingly obsessed with the “feminine duties” of flirtation and presentation (like Melody).

I don’t mean to say that this book required a “deeper message” in order to be a good read. But I wish that it had done what it attempted to successfully. The plot developments piled one on top of the other so rapidly and inconceivably that it was like watching a TV show with a lot of potential for charm gradually but steadily go the way of the ridiculous. Secret affairs, double engagements, deception, an armed showdown!—I became really confused as to what this book wanted us to get out of it, especially when it had tried so hard to present itself as poised, instead of melodramatic. But that’s what it became, in the end.

SHADES OF MILK AND HONEY makes for a charming diversion for fans of Austen and light fantasy, but beyond that I’m not sure it has enough power to make an impression. It might even be that the more one thinks about this book afterwards, the more annoyed one might get. I enjoyed approximately the first half of the book, and still think the concept is a good one, but when I came to the end I was glad to be finished. And I’m not sure that’s a feeling I want to get out of reading.

Cover discussion: Kind of that nondescript "portrait of a woman" cover that so many books written in or set in Regency England have.

Borrowed from library.
Posted by Steph Su at 9:07 PM