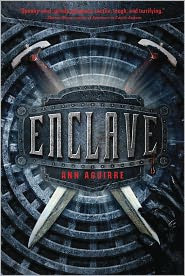 In the future New York City, society has moved underground, and residents receive a name on their sixteenth birthday. After receiving her name, Deuce is marked as a Hunter. Her job is to patrol the extensive underground tunnels to protect her society of Breeders, Builders, brats, elders, and others from flesh-eating Freaks. Deuce and her Hunter partner, Fade, the only person in their enclave to be born aboveground, discover a rising threat to the enclave, but no one will listen to them. But other problems arise as Deuce and Fade are exiled from the enclave, and they must face the dangerous unknowns of life aboveground.

This book reminded me of why I sometimes HATE when writers for adults attempt to write for younger audiences. People, how many times do I have to remind you that having a good premise and combining that with sloppy worldbuilding, a teenaged protagonist, and a love triangle does NOT automatically qualify a book as YA? I managed to finish ENCLAVE, but only because the whole time I kept on expecting it to get better, for it to eventually blow me away. Well, there was definitely no blowing away: my butt remained firmly in my chair, my forehead practically glued to my desk in frustration.

Good things first, I guess. I like Deuce. She belongs in the new, Katniss-esque camp of female protagonists: resourceful, emotionally reserved, tough on the outside, vulnerable and endearing on the inside.

Now for the litany of issues I had with this book, i.e. Why Poor Deuce Deserved a Better Story. Where do I begin? The writing was mediocre. I felt like no sooner was a character or detail introduced then he/she/it either died, got destroyed, or became Significant, rendering all of those introduced characters and details glaringly device-y. Changes in Deuce and Fade’s lives occurred with little regard for logistical backstory: when Deuce is in danger of death by Freak, a random group of dwarf-people who—surprise!—have been secretly living within the tunnels all along come out to save her. Deuce and Fade are cast to the surface for a tradition that, in essence, should make sense as a way that the elders enforced obedience, but, when it actually happens, feels so contrived.

And that’s the problem I continued to have throughout this book. Despite the promising premise, I feel like ENCLAVE only scratched at the surface of its world’s possibilities. For me, a story’s world has to feel like it can exist without an author’s interference: the book has to read like, say, contemporary YA reads to us, which is to say that all the complexities and possibilities of the world have to feel natural. ENCLAVE’s world did not feel natural to me. It felt like the author was writing in aspects of the world as the story went along, and I was left with too many logistical questions and an utter lack of investment. For example, I’m aware that I was supposed to see Deuce’s enclave as a stifling, cruel, and totalitarian governing system, but I never felt stifled on Deuce’s behalf. Everything in this book was begging me to consider it as dangerous, as suspenseful, as intense—which did not allow me to feel anything naturally, except perhaps boredom. It was just not credible.

Deuce was about the only character in this book that I felt like was even remotely well developed, and I’m beginning to suspect that that’s just a trick of the first-person narration. Fade I felt was trying so hard to fit the mysterious-hot-love-interest quota that he ended up being very uninteresting. And OH GOD CAN I JUST RANT HERE ABOUT THE TRANSPARENCY OF THE LOVE TRIANGLE? So Deuce and Fade get into an altercation with a gang. The gang leader, who displays sociopathic tendencies towards homicide, randomly has a change of heart and joins them on their journey to find utopia, or whatever else is a better word for what they’re looking for. He and Deuce hook up when she’s busy agonizing over Fade. Yawn. The obviousness of the romantic elements of ENCLAVE didn’t help dissuade my snarky notion that the author was trying to fulfill some checklist for How to Write Bestselling YA or something.

I also think ENCLAVE took a big (and ultimately unsuccessful) risk in incorporating “idea-dropping” into its narration. “Idea-dropping” is my just-made-up term for a concept similar to name-dropping. It involves describing common modern items in such a way as to make it clear to us what the characters are describing without actually naming it, since, obviously, the characters don’t know the name for it. The one other time I’ve seen idea-dropping used was in another YA dystopian that ultimately didn’t agree with me. I think it’s a literary technique that panders to readers and doesn’t add anything to the world or the characters. I don’t freaking care that they’re eating Spam. All I needed to know was that they were eating long expired canned food. Spam only has implications for us readers, not the characters. Thus, idea-dropping spoon-feeds the dystopian aspect of a story, but I personally find the spoon-feeding offensive to my readerly intellect. There are better ways to write a dystopian than to idea-drop.

And what is up with the Freaks? Are they supposed to be flesh-eating zombies, or a mutation gone terribly wrong, or something else? Why wasn’t there more of an explanation for their existence so that they would also be less device-y? And are you SERIOUS about the disembodied voice that “speaks” to Deuce (or comes to her in a dream, I couldn’t figure out which) and convinces her to make the right decision, etc etc? I didn’t realize that deus ex machinas were so easily accepted! And don’t even get me started on how Tegan is an expendable ninny who inspires no empathy and is like a girl trying desperately not to be TSTL (“too stupid to live”) but, due to shoddy writing, ends up fitting exactly that expendable role.

My problem with ENCLAVE wasn’t that it read like a setup for the rest of the series. Rather, I just cannot respect a story that skimps so heavily on plot, characterization, and worldbuilding. As far as the trilogy is concerned, this is the end of the road for me. I wish all brave travelers who wish to journey beyond this point the best of luck. I’m going to spend my time on more well written books.

Cover discussion: It's alright. It reminds me of a manhole cover. Is it supposed to do that? I actually somewhat prefer the old cover even though it's not very representative of the book. It could be used for a book set in prehistoric times, maybe.

Sent by publisher for review.
Posted by Steph Su at 9:45 AM