Discussion: Is the New LIAR Cover Not Enough?

As most of you know by now, last week's big news was publishing giant Bloomsbury's announcement that they were changing the original cover of Justine Larbalestier's YA psychological thriller, LIAR, into something more representative of Justine's intentions for Micah, the protagonist. The original cover featured a white-looking girl with long, smooth tresses--when Micah is described as being racially mixed, with nappy black hair. The new cover, unveiled last week, looks like this:

A vast improvement over the original, right? The model's race is now consistent with the main character's. When Justine posted the picture on her blog, people went wild with praise. Many are in love with this beautiful cover.
It's beautiful, yes, there's no doubt about it. The girl has the kind of inhuman beauty that makes us hate yet worship supermodels at the same time. And oh yes, it's quite wonderful that the model's race now matches the race that Justine intended Micah to be.
But when my first reaction upon seeing this cover was, "Oh. Ah... well... ah... okay, I guess."
Shocked? Horrified? Incensed at my less-than-passionate response to the new cover? Let me try to explain why I feel this way.

I feel like many readers read books with one of two goals in mind: they want to escape into another, fully realized world, or else they want to find a story that resonates with them, that they can relate to. Either way, one of the most important things is our ability to believe in the MC as a real person, complete with complexities, contradictions, passions, and vulnerabilities. Books like the Gossip Girl or A-List series may be great guilty-pleasure reads, but I doubt that many people read these books and go, wow, I can really relate to / want to be / can see myself in [insert bitchy, beautiful, and tormented character name here]!
In the same way, a book's cover influences the way we perceive the story and characters, whether that is the author and publisher's intentions or not. A cover should aim to reflect the overall mood of the book, if not to provide us with a minutely accurate photograph of what the MC looks like (because every person's preception of the book's MC is slightly different).
When Bloomsbury exchanged the original white model for a black one, they addressed part of the issue, but with an impassioned solution. The new LIAR cover is not enough because this model is absurdly status-quo beautiful. This model has a face that you'd be more likely to see in a Cosmo ad for makeup than in real life. Even more upsetting is that this is the superior--white--race's definition of beauty: the mainstream population is taught that this sort of beauty--symmetry, flawless complexion, soulful eyes--is the sort of look we should all strive for in order to be considered beautiful. Never mind that the model's skin is dark; she has the type of beauty that would be accepted in any social or ethnic stratosphere she journeys to. 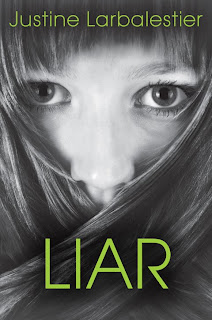 When Bloomsbury replaced the white face that once stood on the cover, they replaced it with an image of beauty that the white, mainstream population considers acceptably beautiful. It's the tactless equivalent of darkening a mainstream model's skin using PhotoShop: there is still something "truthful" missing from this cover. We are still using the "white" standards of beauty for the cover.
The issue of having minority models on book covers is far from having a quick fix. Bloomsbury did a fairly respectable job switching covers in such a short amount of time. However, this cover is a shallow surface fix that has still not succeeded in addressing the fact that white standards dominate almost every aspect of society. Like Neesha Meminger said brilliantly in her guest post on Justine's blog, this is an issue that the dominant race--the white race--needs to address with passionate, prolonged, and never-ending fervor.
This is not a one-time battle, nor is it a one-step solution. The problem lies deeper within our society, the product of hundreds of years of intellectual and biological evolution. Says Zetta Elliott in her insightful comment on Justine's blog entry about the new cover:

As Justine correctly points out, Hollywood and Madison Ave. have long shown a preference for women of color who approximate white standards of beauty; you may not know, however, that this “preference” extends much farther back to the time of slavery.... White abolitionists, committed to ending slavery, could still only sympathize with enslaved women who looked “almost” white (this also operated in literature–Uncle Tom’s Cabin being a glaring example)....

So please don’t dismiss the significance of colorism in today’s society; light-skin privilege (of which I am a beneficiary) is an extension of white supremacy. We need to call it out whenever we see it, and insist upon the human/humane depiction of dark-skinned people in visual culture. Bloomsbury pulled a fast one on us, and I’m about as grateful to them as I am to those white abolitionists who only bought the freedom of pretty, light-skinned slaves.

We have been brought up to believe that the dominant race's standards for pretty much everything is the definition of perfection. Go to college. Raise a family. Have smooth and shiny hair. The cover satisfies the superior race's definitions of beauty and acceptance. But is it a good representation of our society? Says homasse in the comments section:

Is this cover a satisfying solution to the dilemma of an overbearingly white dominance in numerous aspects of publishing and marketing? Must I look at this cover and still think that my looks are inadequate, because I will never have clear skin, a symmetrical face?
Bloggers, readers, authors, and other members of the reading world clamored for a black face on the cover. Well, we got a black face... but one that is still one that conforms to the status quo. It's a step in the right direction, but in the end, it's not enough. It may even be a cop-out.
So, no, I am not satisfied with this LIAR cover. There's a black model on the cover, sure, but she's beautiful by the standards of this world's superior race, and thus fails to address the fact that "white" values are still the only acceptable standards we must all strive towards. I hope that people don't see this changed cover and think that our battle has been won. This is not a win by any stretch; there's a long way to go yet before the representations of humanity that grace the covers of books, magazines, and movies will accurately reflect the diversity of our looks and beliefs. There's a long way to go before the word "beautiful" does not instantly bring one particular image to mind.
What do you think about this issue?
Posted by Steph Su at 1:50 PM