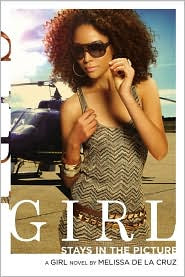 Devon is the biggest teen star around, but ever since her stint in rehab, she needs the success of her starring role in a promising movie to make sure her career doesn’t tank. Devon’s friend and the producer’s daughter Livia underwent surgery to lose almost 200 pounds, and she’s finally beautiful and desired by boys. And fresh-faced Alabama beauty Casey follows her friend and star, Summer, to Saint Tropez, where she’s co-starring in what just happens to be the same movie that Devon’s in and Livia’s father is producing.
But no sooner has everyone gathered in the beautiful south of France than do things begin to deteriorate. Devon finds that her role in the movie has been made less and less important, while more lines and screen time are given to Summer, whose acting is mediocre but whose nastiness is sure not. And she’s having trouble staying out of, well, trouble, especially when her ex and a Greek shipping heir enter the picture. Meanwhile, Livia’s dealing with a bland boyfriend she’s supposed to want to die for, while juggling emotions with a local male friend. And Casey, in between realizing that she has feelings for the movie’s sensitive male lead, sees her role become more “slave” rather than “personal assistant/friend.”
Summer in St. Tropez—will anyone make it out unscathed?
Review
Melissa de la Cruz sure knows how to delight readers looking for a guilty-pleasure read, despite the predictable plot and formulaic characters. GIRL STAYS IN THE PICTURE has everything we could want out of this type of book: sympathetic yet glamorous characters, hot boys, scandals and deception, romance, and exotic locale and costumes.
The changing POV allows readers to embrace Devon, Livia, and Casey as our own friends—friends to which glam and dramatic things happen, of course. We’re meant to cheer for and cry with our beautiful, yet vulnerable, protagonists as they maneuver the dangerous waters of fame and fortune.
However, Melissa’s novels are beginning to blend together in my head. “Tried and true” does not necessarily work best in the book world. Devon’s insecurities clashing with her reputation, Livia’s body image issues, and Casey’s innocent beauty—are things reminding you of THE AU PAIRS yet? The climax of the story involves lots of broken hearts, breakdowns, and revelations of secrets…only to all be resolved in an ending that would’ve been completely saccharine had it not been for the cliffhanger ending (which works kind of well in this case).
Similarly, the boys in GIRL are not as well developed as they can be; they seem to be vague incarnations of every girl’s dream boy, with no true personalities of their own. I would’ve loved more backstory and development of the romantic relationships. I was also rather put off that everything came together so neatly in the end for everyone. Much as we know that these three girls’ stories are not even close to reality, except the pretend one that’s in our head, would it hurt to leave just a little bittersweetness in the story?
That being said, I enjoyed GIRL STAYS IN THE PICTURE for its fast and furious peak into the lives of the rich and famous. Melissa de la Cruz remains my go-to author for guilty-pleasure reads, and this series starter will not disappoint those looking for exactly that.
Similar Authors
Zoey Dean
Cecily von Ziegesar
Writing: 3/5
Characters: 3/5
Plot: 3/5
Overall Rating: 3 out of 5
Posted by Steph Su at 10:00 AM