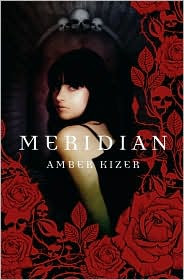 Random House / Aug. 11, 2009
Tags: middle grade, YA, fantasy, paranormal, death, religion, evil
Rating: 3 out of 5
Summary
Meridian Sozu has always been surrounded by death. Insects and animals tend to die around her, and she has few friends as a result. On her sixteenth birthday, Meridian witnesses a car accident, and her body explodes in pain. Immediately she is rushed away from her family and placed in her great-aunt’s home, where she learns the truth about herself. Meridian, like her Auntie and countless other female ancestors in their family, is a Fenestra, a half-human with the ability to guide dying souls to a restful afterlife.
In between learning to use her newfound powers, however, Meridian, Auntie, and a boy named Tens are anxiously awaiting the descent of the Aternocti, a group of malevolent beings intent on killing Fenestras. Meanwhile, the religious townspeople, led by the deceptively innocent Reverend Perimo, are making threats toward the three.
When all hell breaks lose, can love and belief save the day?
Review
MERIDIAN puts an interesting paranormal spin on a tried-and-true storytelling style. I enjoyed learning about the Fenestras and the way they helped souls reach eternal peace, but unfortunately poor execution and choppy writing hampered the story for me.
Meridian is a character with whom she can sympathize. She has been wrenched suddenly from the only life she has known (even though it has been a terribly lonely one), only to find herself with the burden of ancient responsibilities, with hundreds of people bent on intending her harm. The way she reacts to her situation is consistent and plausible, and yet she is able to work that female power in a very heroine-saves-the-day way.
Unfortunately, I felt for the most part disconnected from the story, due to its choppy narration. The concept of Fenestras was a big one to tackle in a couple hundred pages, and I would’ve liked more flow and time spent on clearer explanations, instead of forced, mysterious, and confusing conversations. In the end, I felt like I didn’t connect to any of the characters, and was unimpressed with the development of Meridian and Tens’ romance.
Overall, MERIDIAN is a unique story that will appeal to readers who are not too concerned with the quality of writing.
Similar Authors
Joanne Dahme
Julie Berry (The Amaranth Enchantment)
Aimee Friedman
Aprilynne Pike (Wings)
Writing: 3/5
Characters: 3/5
Plot: 3/5
Overall Rating: 3 out of 5
Cover discussion: 3 out of 5 - I love the designs, and that red and black are the primary colors. The model looks kind of goth-ish to me, which was fine, because I can totally picture her being Meridian.
Posted by Steph Su at 6:26 PM