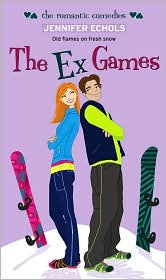 The Ex Games by Jennifer Echols
Summary from Goodreads:
BRACE YOURSELF FOR THE BATTLE OF THE EXES...

Hayden and Nick used to be a hot item, but their brief affair ended with a highly publicized break-up. Now the two are “just friends,” excluding the occasional flirtation.

When Hayden wins the girls’ division of a local snowboarding competition, Nick is unimpressed, claiming that Hayden wouldn’t have a chance against a guy. Hayden calls Nick’s bluff and challenges him to a head-to-head boarding contest. Their mutual friends quickly take sides, the girls on Hayden’s and the boys on Nick’s, making for an all-out battle of the sexes. This friendly competition is bound to get heated--and if they’re not careful, they might end up igniting some old flames.
If I'm in need of a light, fluffy read, I do not hesitate to reach for some Jennifer Echols. Her books are genuinely funny (something other Simon Pulse Ro-Coms often fail to manage) and sweet, and her characters go beyond the usual romantic comedy stereotypes. So far, I have not been disappointed with any of her books that I've read, and this one's synopsis promises to be equally cute and equally well-written!
The Ex Games will be released in paperback by Simon Pulse on September 8, 2009.
Posted by Steph Su at 8:30 AM