In My Mailbox is inspired by Alea and memefied by Kristi. Check out Kristi's post to see what others got in terms of books this week!

It's been a while since I've done one, and look at all the beautiful books that have piled up! I'm only listing the ones I received for review because I'm not able to keep track of the books I've swapped/bought. 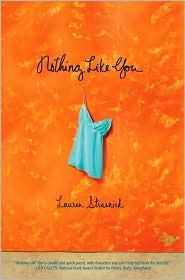 When Holly loses her virginity to Paul, a guy she barely knows, she assumes their encounter is a one-night stand. After all, Paul is too popular to even be speaking to Holly, and he happens to have a long-term girlfriend, Saskia. But ever since Holly’s mom died six months ago, Holly has been numb to the world, and she’s getting desperate to feel something, anything—so when Paul keeps pursuing her, Holly relents. Paul’s kisses are a welcome diversion, and it’s nice to feel like the kind of girl that a guy like Paul would choose.


But things aren’t so simple with Saskia around. Paul’s real girlfriend is willowy and perfect… and nothing like Holly. To make matters worse, she and Holly are becoming friends. Suddenly the consequences of Holly’s choices are all too real, and Holly stands to lose more than she ever realized she had.

I've been wanting to read this ever since I heard about it over the summer and featured it as one of my Waiting on Wednesday picks. Thank you, Lauren! 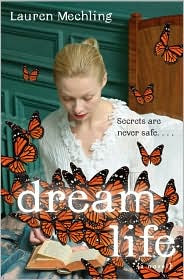 Claire Voyante's first semester at Henry Hudson High School was eventful, to say the least. As she heads into her second semester, things are calming down a bit. But Claire has a few secrets that are getting harder to keep. Her biggest secret of all? The onyx and ivory cameo necklace her grandmother gave her for her 15th birthday. Ever since she started wearing it, her dreams have been coming to her in black and white and turning out to be oddly prophetic.


Becca’s been hanging out with her old prep school friends and never seems to have time for Claire anymore. And soon, Claire discovers why—there’s a secret group of society girls with a mysterious identity. And, turns out, a mysterious enemy who’s out to get them. The second she sniffs out trouble, Claire jumps on the case. But is it someone close to Claire who’s in danger again—or could it be Claire herself whose life is at stake?

Lauren is one of my favorite author friends to talk to via email, and I'm excited to be able to help her promote her book. Thanks, Lauren! 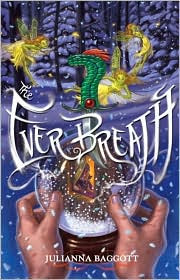 In a world where locust fairies flutter and firebreathers burst from snowbanks, two children are having the adventure of their lives. Truman and his twin sister, Camille, have just met their grandmother . . . and she’s a little strange. She whispers a tale about something called the Ever Breath, an amber orb that maintains the balance between our world and a dreamy one of imagination—and evil.


Soon Truman and Camille find themselves in the Breath World, a magical place where ogres clash and a mouse holds the key to a mystery. Some creatures want to help them—and some want them D-E-A-D. That’s because the Ever Breath has been stolen, and an epic battle is raging to bring it safely back. Can the twins save not only one world—but two?

A surprise package from Random House. I wonder what it's going to be like... 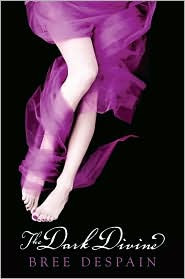 Grace Divine, daughter of the local pastor, always knew something terrible happened the night Daniel Kalbi disappeared--the night she found her brother Jude collapsed on the porch, covered in his own blood--but she has no idea what a truly monstrous secret that night held.


The memories her family has tried to bury resurface when Daniel returns, three years later, and enrolls in Grace and Jude's high school. Despite promising Jude she'll stay away, Grace cannot deny her attraction to Daniel's shocking artistic abilities, his way of getting her to look at the world from new angles, and the strange, hungry glint in his eyes.


The closer Grace gets to Daniel, the more she jeopardizes her life, as her actions stir resentment in Jude and drive him to embrace the ancient evil Daniel unleashed that horrific night. Grace must discover the truth behind the boy's dark secret...and the cure that can save the ones she loves. But she may have to lay down the ultimate sacrifice to do it--her soul.

I'm not sure why I randomly got two copies of this in the mail, but I'm not complaining!

Cassandra Renfield has always seen the mark—a glow around certain people reminiscent of candlelight. But the one time she mentioned it, it was dismissed as a trick of the light. Until the day she watches a man awash in the mark die. After searching her memories, Cassie realizes she can see a person’s imminent death. Not how or where, only when: today.


Armed with a vague understanding of the light, Cassie begins to explore her “gift,” seeking those marked for death and probing the line between decision and destiny. Though she’s careful to hide her secret—even from her new philosophy-obsessed boyfriend—with each impending death comes the temptation to test fate. But so many questions remain. How does the mark work? Why is she the only one who sees it? And finally, the most important of all: If you know today is someone’s last, should you tell them?

So excited! Thanks, Caroline! 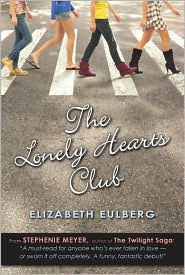 Penny is sick of boys and sick of dating. So she vows: no more. It's a personal choice. . .and, of course, soon everyone wants to know about it. And a few other girls are inspired. A movement is born: The Lonely Hearts Club (named after the band from Sgt. Pepper). Penny is suddenly known for her nondating ways . . . which is too bad, because there's this certain boy she can't help but like. . . .

I received this as part of the blog tour I'm going to be in to promote Elizabeth's book. Looking forward to seeing how I'll like it, as I've read mixed reviews of it. Thanks, Chelsy!

While visiting her grandmother's house, an old photograph leads Tanya to an unsolved mystery. Fifty years ago a girl vanished in the woods nearby - a girl Tanya's grandmother will not speak of. Fabian, the caretaker's son, is tormented by the girl's disappearance. His grandfather was the last person to see her alive, and has lived under suspicion ever since. Together, Tanya and Fabian decide to find the truth. But Tanya has her own secret: the ability to see fairies. Can it help them to unravel the mystery? Soon they are facing terrible danger. Could the manor's sinister history be about to repeat itself?

I've heard good things about this book from my UK blogger friends, as this was originally published there. And I LOVE the cover! It's so colorful and detailed and attractive!

Prophecy of the Sisters, Book 2: Guardian of the Gate by Michelle Zink
(Little, Brown / Aug. 2010)

As sixteen-year-old Lia Milthorpe searches for a way to end the prophecy that has divided her family for generations, her twin sister Alice hones the skills she'll need to defeat Lia. Alice will stop at nothing to reclaim her sister's role in the prophecy, and that's not the only thing she wants. There's also Lia's beloved, James.


The sisters always knew that the prophecy would turn their closest allies against them. But they didn't know what betrayal could lead them to do. In the end, only one sister will be left standing.

Do I even have to say anything? :)

Scarlett March lives to hunt the Fenris-- the werewolves that took her eye when she was defending her sister Rosie from a brutal attack. Armed with a razor-sharp hatchet and blood-red cloak, Scarlett is an expert at luring and slaying the wolves. She's determined to protect other young girls from a grisly death, and her raging heart will not rest until every single wolf is dead.


Rosie March once felt her bond with her sister was unbreakable. Owing Scarlett her life, Rosie hunts fiercely alongside her. Now Rosie dreams of a life beyond the wolves and finds herself drawn to Silas, a young woodsman who is deadly with an ax-- but loving him means betraying her sister and has the potential to destroy all they've worked for.

Yay! I loved Jackson's first novel, As You Wish, and I'm so excited to read this one. Plus, this has got to be one of my favorite covers of all time.

The three LB ARCs were received through a promotion that the LB booth held at the NCTE Conference I attended in Philly back in November. Yay for studying English & Education!