Today I am happy to be a part of a blog tour promoting Libby Schmais' debut YA novel, The Pillow Book of Lotus Lowenstein (Random House / out TODAY)! This book caught my eye a few months ago with its cute title and premise, and I'm happy today to bring you my review of it, as well as an interview with the author. There is also a French word du jour at every blog tour stop (see the complete tourapalooza schedule here). Collect them all and you can enter to win some fantastic prizes! 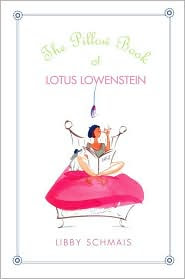 Lotus is obsessed with French culture. She swears by French dieting, idolizes French existentialists, and drops French words into her conversation and writing as much as possible. Lotus’ dream is to move to Paris, immerse herself in the culture, and hopefully find a hot Parisian boyfriend. The only problem is, she’s stuck in Brooklyn, New York, with stressed-out parents and a chess-master little brother who make light of her dedication to the French culture.

When Lotus and her best friend, Joni, start a French club at school, they figure they’ll be the only members…until Sean walks in the room. New to school, Sean is cute and an existentialist, thus making him the perfect boy for both Lotus and Joni’s affections. Sean doesn’t seem to have a problem being with both of them at the same time, but the stress wears on Joni and Lotus’ friendship. Will an upcoming French club trip to Montreal repair the girls’ friendship, or has Sean destroyed it forever?

Lotus is a relatable protagonist whose obsession with French culture brings a flair of uniqueness to novels-in-diary-format. Lotus may be occasionally shallow, dumb, and obsessed, which will turn her off to readers who don’t enjoy those kinds of characters, but she is loyal to her friends and family through and through. The most remarkable part of this book is Lotus’ growth from self-obsessed, whiny teenager to a mature young woman, capable of making sacrifices for others, but still not above being good and true to herself. Often she doesn’t quite know how she can help, but whether it’s hanging around rehearsals while her father attempts to make his playwriting debut, or helping her teacher make over her life, she tries her utmost hardest and approaches everything she does with the complete goodness of her heart.

The supporting characters are well drawn for a story told entirely in the protagonist’s diary entries. There are underlying conflicts and subplots involving Lotus’ parents, younger brother, teacher, grandmother…Lotus’ world is rich with interpersonal relationships, and the other people enhance Lotus’ appeal as well, as she is an extrovert and shows her best side when she interacts with others. Sean is, admittedly, a bit weak as the supposed love interest, but his lack of character didn’t disturb me as much because there was so many better and more important things going on.

Overall, THE PILLOW BOOK OF LOTUS LOWENSTEIN is a great read if you enjoy novels written in diary entries, chatty main characters, and have ever thought of escaping your boring hometown for someplace more exotic. I hope that fans of Bridget Jones and Georgia Nicholson will give Lotus and her story a try, because this is a worthy addition to the subgenre. Vive la one and only Lotus!


Cover discussion: 3 out of 5 - It's quite cute, and very different from anything out there. The whiteness of the cover as well as its watercolor sketch-like appearance would attract me for sure!

Thank you, Sarah, for sending me a copy of this book for the tour!

And now, an interview with the author:

1. Lotus is obsessed with French culture. What are some of your own French obsessions?

Well, like Lotus, I love French food, especially croissants, moules frites and delicious French cheeses. Luckily there are some great restaurants and cheese stores here in Brooklyn. I also have a weakness for a French accent – everything sounds so elegant and sexy in French. And I love French movies and songs in French. I even have a special playlist on my iPod with current singers like Keren Ann, Mareva and Coralie Clement and some classics like Serge Gainsborough and Francoise Hardy.

2. Did you have knowledge of the French language and culture before writing this book?

When I was in college, I spent a semester in France, which is where I learned to speak French and adore all things French

3. How was writing The Pillow Book of Lotus Lowenstein different from writing your other adult books?

I think the difference was that I felt a little freer in the writing, maybe because at the time I didn’t really know that I was writing a teen novel. I was just writing a novel about a quirky girl who lived in Brooklyn and I wasn’t really thinking about the audience. It’s only when I went to sell the book that I realized it was a YA, not an adult novel.

4. Have you ever been to Montreal? What are your favorite things there?

Yes, I’ve been to Montreal several times and it’s an amazing city. From New York, it’s easy to get to, and there’s tons to do. Two summers ago, my husband and I rented an apartment in Montreal for a week, which was wonderful. It’s a perfect city to walk around -- there’s some beautiful parks like Parc du Mont Royal and some really cool neighborhoods to explore, like Plateau, not to mention the most amazing farmer’s market -- Jean Talon. In August, when we went, there was also an international film festival happening, so we saw some French and Canadian films we probably would never have heard of otherwise.

5. Why did you decide to write Lotus' story via diary entries?

I’ve always had a fascination with the diary format because it takes a certain kind of confidence to believe that your daily thoughts are so important that they should be recorded for posterity, and Lotus definitely has that. I’ve read so many great diary books – some of my favorites are the Adrian Mole diaries & I Capture the Castle. Since part of The Pillow Book of Lotus Lowenstein revolves around another diary book, The Pillow Book of Sei Shonagon, it just made sense to write the entire book in diary format.

6. Are you, like Lotus, also a fashionista? What is your favorite outfit to wear for a nice stroll in the park?

I love clothes, but I wouldn’t describe myself as a fashionista. I certainly don’t have the fearlessness to make Lotus’ bold fashion choices, but I will admit to having a subscription to both Vogue and Elle. I also have a weakness for fashion shows like Project Runway, even though I can’t sew to save my life. Lotus and I also share an addiction to makeup and a heavy Sephora habit. For a stroll in the park, I’d wear something comfy, but accessorize with sunscreen and a little concealer.

7. Lotus has a very peculiar approach to health, dieting, and hygiene. She is often bothered by the behavior of a coworker at the health center where she worked, but swears by French food. What are some of your "people" pet peeves? Do you have any health advice that you swear by?

I think I just liked the contrast of Lotus believing that French food was the road to weight loss and health while the people in the Wellness Center believed that drinking coffee was evil. I guess that would be my biggest “people peeve,” when people believe there is only one right way to live, or eat or think. As far as health advice, I believe in all things in moderation, including moderation, so I say, go ahead and treat yourself to something delicious, preferably French.

I’m actually in the middle of writing my second YA novel, this time about a girl who is obsessed with everything related to Tudor England. It’s been really fun to write and I even travelled to London to do some research for it.

9. And last but certainly not least: what is the French word du jour?

Today’s French Word du Jour is l’amour (which, of course, means “love”). If you collect all the French words du jour on the Blog Tourapalooza, you can enter a contest to win fabulous prizes (A $25 Sephora gift card and a personally autographed Pillow Book!). Once you’ve visited all the blog tour stops and collected all the words, email the complete list of words to lotuslowenstein@gmail.com with the subject line “French Word du Jour Contest.” All e-mail entries must be received by midnight (EST) on December 21, 2009. The winner will be selected at random on December 22, 2009. Be sure to include your name, e-mail address, and daytime phone number with your entry (If you're under age 13, give your parent's contact info). The complete My-Life-Is-Merde-but-Have-a-Bonnes-Fêtes-Anyway Blog Tourapalooza schedule can be found at lotuslowenstein.com. Our next tour stop is Butterfly Book Reviews (http://butterflybookreviews.blogspot.com/)on December 9. See you on the road, mes amis!

Thank you, Libby and Sarah, for allowing me to be part of this tour!
Posted by Steph Su at 10:23 AM