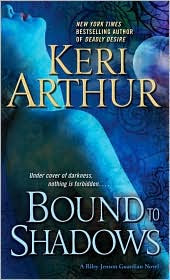 Half-werewolf, half-vampire Riley Jensen’s job as guardian in keeping the peace between humans and supernaturals is never easy. Her latest job involves the mysterious beheadings of vampires near a sleazy bar run by a sex-appeal-oozing vampire. Riley feels that the case is tied to the seemingly inexplicable deaths of several women throughout Melbourne. As she struggles to find the connection and the killers, however, Riley’s love life is shaken by the reappearance of her werewolf soul mate, the hit man Kye. Riley’s wolf side can’t help but be attracted to this heartless man, but her heart really belongs to Quinn, an old vampire.

BOUND TO SHADOWS will satisfy fans of this series, be enjoyable for fans of paranormal lit published in mass market paperback format, and most likely be frustrating for those with a wider range of literary interests. This ambitious novel had a lot of flaws that bothered me but would probably go unnoticed by steady readers of this genre.

Riley’s world is complex, with supernatural creatures of all kind running together, getting in one another’s way, adding multiple dimensions to the story. Personally I am a vampire girl, but I thought the werewolf aspect of Riley’s nature was well done: it has its own share of unavoidable instincts and desires (most of which involve lust and sex, I’ll tell you up front). You can’t go a chapter without running into something new and exciting, and I appreciated the way that Arthur was able to introduce all these complexities to us without getting us hopelessly tangled.

The characters in this book were well drawn, appealing and believable. I particularly liked Kye—but then again, I’ve always had a soft spot for the seemingly hopeless bad ones. If you prefer your lovers to be gentlemanly, you’ll root for Quinn. Riley is, unfortunately, not as likable as her love interests, for I often found her narration, dialogue, and thought process to be a bit stilted.

In fact, the writing was what held back my opinion of this book and series. Much of the story seemed a little too staged to be believable: the author was clearly following a set route around the story’s world, with a completely different scene and subplot abruptly following the development of another. In addition, the romance scenes were blunt, and thus unromantic. There is a lot of buildup to the act, and then the actual sex was treated very brusquely, leaving readers detached from Riley at those moments.

That being said, Keri Arthur’s ambitious ideas make sure that she doesn’t shy away from the tragedy. BOUND TO SHADOWS ends sadly: I was practically screaming in tears at the book at the end. But I can’t help but being impressed at Arthur’s decisions. Like I said earlier, BOUND TO SHADOWS will definitely make Riley Jensen fans happy. I don’t think I will read this series, but those who love their paranormal worlds complex and sexy will get a kick out of these books.


Cover discussion: 1.5 out of 5 - Bleh. I know it's a serial MMPB, but couldn't they do better with the covers on these series? They're all so... bland and similar.

Thank you, Tricia, for offering me a copy for review.
Posted by Steph Su at 7:25 PM