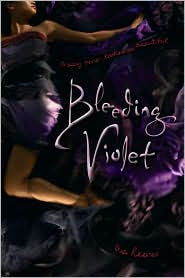 Hanna Jarvinen is an unusual teenager. She is biracial, sees and hears hallucinations, wears only purple to remember her dead father (with whose ghost she still communicates)—and is hardly extraordinary when she arrives on her mother’s doorstep in Portero, Texas, after her aunt kicked her out.

That’s because Portero is far weirder than Hanna could’ve imagined. It contains dangerous monsters and many doors between worlds. Portero is hardly the place for Hanna to fall in love and get to know her mother better, but Hanna is nothing if not determined to get what she wants, in spite of both human and inhuman obstacles.

Not since I read Holly Black’s TITHE five years ago have I encountered a story as unique and fascinatingly compelling as Dia Reeve’s debut novel, BLEEDING VIOLET. Indeed, BLEEDING VIOLET defies adequate description and categorization, blending snark, relationship issues, and the supernatural into a sexy paranormal read that will be hard to forget.

From page one, Dia unapologetically yanks readers into a dark and twisted world where monsters and mental illness are simply Hanna and Portero’s way of life, confused people be damned. While this total immersion in the world of Portero may be initially jarring, once I began figuring things out, I felt like I had been let in on a terrific secret, and I LOVED being in Hanna’s world. It’s brutal and shocking, and not for one second can you look away.

Hanna is a protagonist like no other, with her crazy thoughts and her way of looking at the world. She’s slightly disturbing yet inexplicably alluring, the kind of girl you know you should stay away from but who part of you almost wants to be. Hanna is fearlessly original in her interactions with the Porterenes: the awkwardness of her developing relationship with her mother is well drawn, and I found Hanna’s budding romance with Wyatt, a local boy with an important job in monster-policing, to be one of the most well-developed romances I’ve read in recent YA literature. From beginning to end it’s no fairy-tale relationship: there’s no immediate rush of physical and soul-mate attraction, but rather the blossoming of it through witty repartees.

BLEEDING VIOLET is not for those who like their reading fluffy. It’s dark, unapologetic in its occasional gory and weird scenes. Some may disapprove of Hanna and Wyatt’s physical relationship (though personally I found it sexy and well done). Others may be too hopelessly confused by the first couple of chapters or the occasional vagueness of the plot to connect with it. But if you’re looking for a one-of-a-kind dark read, I will find it hard to resist thrusting this book into your hands. Read it, and maybe you will savor it like I did!


Cover discussion: 3.5 out of 5 - It's purple and manic and totally representative of Hanna. Definitely compelling and something I would pick up on a whim in the store!


Thanks to the awesome Sharon for letting me borrow her copy!
Posted by Steph Su at 11:19 AM