I stumbled upon Donna's blog, Bites, a few weeks ago and it quickly became one of my favorites. She always has a new, sometimes controversial topic to discuss in an intelligent but snarky manner. Don't even try to get into an argument with her, because she'll win, while you roll on the ground, dying of laughter!

Welcome! Can you tell us about yourself in a few short sentences?

Hmmm . . . my name is Donna, I'm 25 (soon to be 26), I live in Connecticut (and sooner rather than later in California), I work as an insurance underwriter by day and crank out young adult fantasy novels by night. My numero uno hobby is writing. I've been doing it since I was 9 and have been taking it seriously since late 2007. In early 2008 I got my first placement in a national humor-writing competition that got me to visit San Francisco for the first time and even garnered some agent interest. Much fun! I read whenever I can and I love to travel. I did study broad when I was in college and lived in London and traveled to Ireland, Spain, France, Belgium, The Netherlands, Italy and Croatia. My number one vacation spot is Santa Cruz, California at the moment. Love that place. I have a sick Lost Boys obsession, which coincides with my odd 80s obsession but I love it all. I also have a dog, a Miniature Pinscher (German for "demon spawn from Hell") named Malfoy (yes, that Malfoy) who also answers to Dude and Spaz. And New York City is one of the loves of my life.

Amen, NYC! Tell us about your blog. When did you start it and why? How did you come up with your blog name? What interesting things can visitors expect?

My blog is kind of a spin-off of my writing blog. There I reviewed the books that I was reading but once I found out about the whole YA book blog community, I decided to separate the two and start my own book blog that had me infiltrating the community that I love to read and also write. It serves as a double purpose - I get to spend my time wading around in awesome books and communicating with awesome bloggers and I'm working on my networking for the future. Hopefully not too distant future!

Bites actually just started at the end of this past January and I wanted a name that reflected my review style. Since I thought Cujo was going a little too far, Bites was a nice medium between brutally honest and just this side of nice of fangirl praise. I can go either way on that depending on what I'm reading. When you come to my blog expect opinionated reviews substantiated by constructive criticism of what I read. If I don't like something, I'll say it but I'll give you reasons why. I also have a few features, one is Freaky Friday which is my own version of Sharon from Sharon loves Books and Cats's Flashback Fridays where I highlight one book a week from the YA horror genre published between 1980 and 1999. I've subtitled it Horror Whores because I'm a serious horror whore. I can't get enough of it. I also started 80s Awesomeness! which highlights one little piece of the 80s every week, from movies to music to games, toys, fashion, whatever. It's all 80s. I've jumped on the In My Mailbox bandwagon too but I've titled mine Added to the Pile since most of my books come from the store and not through the mail. I have a few things planned for the future too but you're going to have to wait for those.
What are 3 books you would recommend that everyone read? 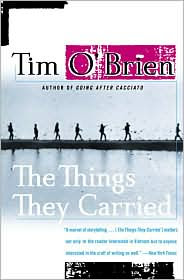 The Things They Carried by Tim O'Brien - it's metafiction about a group of guys living through the Vietnam war told from different perspectives, it may not be YA but it'll read just as fast as one and have you in complete awe by the end of it. 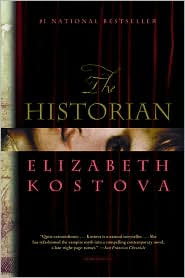 The Historian by Elizabeth Kostova - it's Dracula retold without the romance but all of the horror, I didn't find out until long after I read this book that it's over 400,000 words long (your average YA book is 65,000), I had no idea, I read the thing in three days, just couldn't put it down, if you're into history and what could very well be the "real" story of Count Dracula and you're a vampire fan, this is the book for you

Why We Suck by Dr. Denis Leary - because everyone needs a healthy dose of shut the fuck up and a smakc upside the head every once in a while, if you have an affinity for the angry, disgruntled comic that doesn't know the meaning of the word "sugar-coat," you'll want to read this one.

Eee, no YA titles in there. I'll throw one in for posterity. The Cirque du Freak series - quite possibly one of the best YA vampire series I've ever read, if you want something different, has a male MC and focuses on the actual adjustment of being a vampire instead of the glitz and glamor, you'll want to read this.

Hehe, no YA, but great titles. The Things They Carried is one of my favorite books too. If you could eat dinner with anyone, dead or alive, who would it be and why?

Cleopatra - one of few women with genuine power that could manipulate anyone to getting what she wanted for her country and thrived as a queen, there's hardly a mind today that could surpass such intelligence and clarity and sheer will
Favorite authors?

I feel like all I do is read and yet my TBR pile is still persistently huge and I feel I still don't have a grip on current YA authors. What the deuce?
No worries, Donna! There are so many incredible up-and-coming YA authors that it's impossible to keep track of them all! And that's not saying that your favorite authors list isn't good, because it is! So what is your dream job?

To make a living off of my writing and do it in my beach-side condo in California. 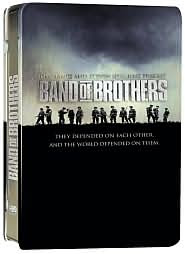 What are some things you just LOVE to receive for presents? :)

Does cash to pay down my student loans count? I love to get DVD TV series. I got the entire collection of Rome which is one of the most god-awesome series ever (HBO in case you've never heard of it). Funny story on that - I watched a lot of the episodes with my dad and his wife and there's Skinimax levels of sex in the show and one of the most popular positions is doggie style (it has to do with male dominance in Roman society as opposed to a popular sex position). So we're watching it one day and my dad's wife is like "why are they doing it backwards?" *headdesk* "Does it have to do with anal?" *facepalm* You know, it's just not right to have to give your own parents a sex education lesson. I'm scarred.

Anyway, I've gotten Rome, Band of Brothers (if you haven't seen it, go watch. Nao.), Rescue Me, House, I have a season of The Sopranos in there, some Family Guy and The Simpsons. It's how I watch TV. And I love giftcards. People say it's so impersonal but I don't know about you, I don't like giving people lists of what I want for Christmas or my birthday. I like Barnes and Noble. Get me a giftcard there and I'll be as happy as a pig in shit.
And finally, tell us 2 things about yourself that can spark conversation.

I'll give you three things because I don't feel like picking--

1. By the time I was seven I'd dislocated both elbows and fractured both collar bones and had gone to the same hospital so many times for those injuries that the doctors and nurses started questioning my parents about child abuse. Also because of those injuries my arms are hyperflexive and I can actually overlap my elbows behind my back. You know those dumb little boys that giggle as they ask you if you can touch your elbows behind your back? Yeah, I actually do it and make them gag.

2. I desperately want to learn to fly.

3. Despite my insane fear of the ocean (we're talking panic attack levels here), I want to learn to surf.
-

Thank you for the awesome interview, Donna! I look forward to reading your novels in the future, and I hope that you'll keep us devoted blogger readers in mind when you, ahem, start to need reviews. :) Donna has also recently posted about the fight over whether or not YA should be considered literature or not, which I found fascinating. Head over to her blog to be amazed, entertained, and enlightened.
Posted by Steph Su at 11:39 AM