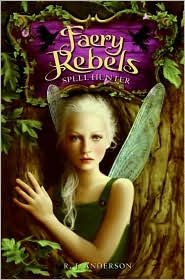 Publication date: April 28, 2009
Tags: YA, middle grade, fantasy, faeries, friendship
Rating: 5 out of 5
Summary
After a horrifying yet mysterious event known as the Sundering, the faeries who live in the Oakenwyld possess very little magic, and something seems to be killing them off, even as their queen, Amaryllis, forbids them to go outside the Oak, for fear that predators—such as crows and the terrifying humans—will destroy them even faster.
However, the Queen’s Hunter, Knife, will not be satisfied with staying away from the humans. She ends up befriending Paul, a crippled human boy living in the nearby House. The more Knife learns about the humans, the more she thinks there is something fishy about her faery community’s mistrust of humans. With Paul and her faery friends’ help, Knife may be able to discover what is ailing Oakenwyld—but only at the cost of heavy sacrifices. What is Knife willing to do for love, even if the love is impossible?
Review
The world of FAERY REBELS is instantly engaging, a space filled with danger, betrayal, creativity, and hope. Knife is a fantastic character, a young faery willing to follow her instincts and take risks; she reminds me a lot of Katniss from The Hunger Games, which was GREAT! I have no doubt that she will easily win the hearts of readers of all ages.
R. J. Anderson spins a convincing world with strong supporting characters and an elaborate plotline, filled with interesting backstories. At times I got frustrated when the characters felt the need to talk aloud every step of their thought process to reach revelations that I, as the reader, would’ve liked to figure out myself, instead of being smashed in the face with it. But I can see why younger readers—those in middle school—wouldn’t be bothered by that, so I suppose it was just a minor complaint on my part.
Overall, FAERY REBELS is a must-read 2009 debut novel. You will reluctantly put the book down at the end, sad because you crave so much more of Knife and Paul’s world. Seriously, treat yourself to this marvelous fantasy novel, and then you, like me, will be eagerly awaiting what R. J. Anderson has for us next.

Similar Authors
Suzanne Collins (The Hunger Games)
Holly Black (Tithe)
Writing: 4/5
Characters: 5/5
Plot: 4/5
Overall Rating: 5 out of 5
Cover discussion: 3 out of 5 - I'm slightly disturbed by the faery appearance of the model: you know, skinniness, white hair. But it is fairly representative of what the faeries in this book look like, and I can't tell you how much I appreciate non-stock photo covers!
-
I promise there will be a non-review post coming up soon (maybe later tonight), but in the meantime, comment on this review of Faery Rebels and get an extra entry for my Support Teen Lit Giant Giveaway!
Posted by Steph Su at 12:35 PM