Review: The Season by Sarah MacLean 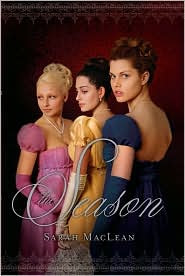 Tags: YA, historical, Regency England, murder, mystery
Rating: 3 out of 5
Summary
Seventeen-year-old Alexandra Stafford, along with her friends Vivi and Ella, are about to enter their first season amidst the “ton”—the most eligible of the eligible, the best and the brightest of London. Only Alex and her friends are not your average pretty-girl gigglies. They’d rather stay out of the whole flirting and courting business, away from men who prefer women with vacant minds…women unlike them.
With high-status parents, however, Alex is unable to stay completely out of society. Instead, her circle consists mostly of her three older brothers and their best friend, Gavin Sewell, the new Earl of Blackmoor, whose father died in a mysterious accident that’s beginning to not look like an accident at all. Alex expected many things out of the season—boring balls, an overabundance of uninteresting suitors—but she never expected to feel for Gavin things that she has never felt before. Someone’s out for Gavin’s blood, however, to make sure that he doesn’t discover the truth about his father’s death, and it may be up to Alex to save the life of her beloved.
Review
I have mixed feelings about THE SEASON. On the one hand, it’s gotten rave reviews from nearly everyone I know. Parts of those praises I feel are justified: Alex’s world is addicting, and even during the moments when I wanted to sigh and put the book down in frustration, I felt compelled by unseen forces to continue, hoping, hoping, wanting more from her world…
…And that’s where I think my problem with the book lies. On one level, Alex’s world seems great: the glamour, the scintillating company, the witty banter between siblings and friends. But that’s just it; all of these things only occur on one level. I couldn’t help but feel like the characters were merely putting on a role, saying lines dictated to them without really meaning it. (And with the acting cues to go with it. There were only so many times I could read phrases like “she felt her voice rise in defensive ire” and “he rolled his eyes at his mother’s brazen words,” or things along those lines. We readers can figure out how the characters are feeling at that moment—or at least we should be able to, through the language they use. No need to state the obvious over and over again.)
With so many characters packed into this book, it was hard for me to keep track of who is who, what their personalities were like. I was constantly mixing up Alex’s brothers, Nick, Will, and Kit, because they are virtually indistinguishable from one another. Similarly, I disliked how Vivi and Ella were shallowly portrayed mostly as Alex’s “ladies-in-waiting,” always just reacting to Alex’s crises and never, seemingly, having desires or even opinions of their own. I would’ve loved to see all the secondary characters change more through the book. THE SEASON centers around Alex and Gavin’s relationship, yes, but for a book that depends so much on the characters’ interactions with one another, shouldn’t equal care be put into developing the others’ personalities as well?
Another thing that led to me being unable to get into this book was the pacing. For some reason, I had thought that the mystery behind the earl’s death, and the impending danger on Gavin and Alex, would have been given more time and explanation. It was certainly something I wanted to know more about. However, the murder mystery ended up feeling like one great big plot device: like, oh, there’s this group of chatty girls in pretty dresses and their ho-ho-ho-hear-me-I’m-so-witty-and-yet-I-disdain-societal-expectations male friends/brothers and now we just HAVE to make something happen in the story so it doesn’t digress into a meaningless pile of dialogue.
Nothing really happened until more than halfway into the book, which was where the relationship between Gavin and Alex intensified, and things started to pick up with the murder mystery. But if it takes a book half its length to get the ball rolling, I’m not sure if I’d be willing to stick it out until then. Unless it gets really, really good at the end. Which it doesn’t. Anyone can spot the hasty, picture-perfect ending from a mile off. It’s sad if I feel like I don’t need to read most of the book in order to understand what’s going on.
I understand the appeal of a Regency-era girl who doesn’t conform to the social norms of her time of wanting the rich husband, the best status, etc. I have no doubt that those who enjoy Anna Godbersen’s LUXE series—frothy, light guilty pleasures—will enjoy THE SEASON. While it lacked enough substance for my taste, I will still read Sarah MacLean’s future works, because I do believe she has the talent to create three-dimensional characters that we’ll end up liking and caring about.