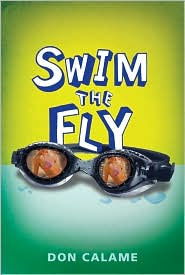 Publication Date: April 14, 2009
Tags: YA, humor, boys, swimming, summer
Overall Rating: 4.5 out of 5
Summary
Every summer since they were little, Matt Gratton and his two best friends, Coop and Sean, have set goals for themselves. This year, it’s to see a real live naked girl. Pictures don’t count. Porn doesn’t count. A real girl, alive and warm and luscious, counts.
Meanwhile, Matt is busying trying to figure out how he can win the attention of Kelly West, a beautiful fellow swimmer. He decides to volunteer to swim the 100 fly—the hardest race ever—in order to impress her, but quickly realizes that he is NOT equipped to swim the fly at all.
In between trying to accomplish their goal and trying to make sure he doesn’t end up making a fool of himself, Matt doesn’t realize that he also has time to open his eyes to some bigger and better things that are out there for him.
Review
What can I say about SWIM THE FLY that will do it justice? This book absolutely blew me away. I found myself rolling on the ground in laughter and devouring the pages as I couldn’t stop flipping through them, eager to see what sort of scrapes Matt and his adorable friends get themselves into. Think There’s Something About Mary starring teenagers, and you can get a slight sense of the appeal that this book will have for both males and females.
Besides for being just an all-around terrific writer, Don’s strength seems to lie in drawing realistic yet unique characters. Matt, Cooper, and Sean had distinct personalities and ways of talking, which is a feat that is rarely accomplished in writing about a tight group of friends. If you ask me to pick a favorite character from SWIM THE FLY, I don’t think I can even give you a straight answer; all of the male characters are HILARIOUS. (See: Matt’s grandfather.)
This book feels like something that would be adapted into a "bromance" movie, but written in Don's voice, the predicaments that Matt and his friends get themselves in do not seem over the top, as they would on the silver screen. I was amazed at how much I was enjoying failed guy antics in a way that I never for a movie. My only complaint would be the the too speedy and tidy, albeit funny, ending, but perhaps that was because I never wanted the book to end!
SWIM THE FLY is just the right combination of gut-splitting humor, teen romance, and failed “missions” to win the hearts of any reader. I await Don’s future novels with great impatience now!
Similar Authors
John Green (An Abundance of Katherines)
Writing: 5/5
Characters: 5/5
Plot: 4/5
Thank you to KC Dyer and Don for providing me with a copy of this fantastic ARC!
Cover: 4 out of 5 - I love the simplicity of the goggles on the greenish background, and the cool title font hints of the fun that's awaiting inside. Also didn't realize that there's a bikini-clad girl within the goggles until I actually received the ARC! Hehe, very subtle.
There will be more Don Calame- and Swim the Fly-related stuff very soon... So you'll want to stick around... =P
Posted by Steph Su at 9:05 AM

Email ThisBlogThis!Share to TwitterShare to FacebookShare to Pinterest
Labels: 4.5, don calame, review, YA