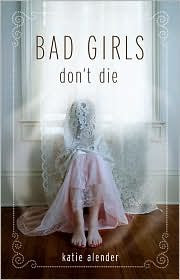 Publication date: April 21, 2009
Tags: YA, ghosts, horror, suspense, evil
Rating: 4 out of 5
Summary
Photography-lover Alexis Warren lives in an enormous, rambling, slightly creepy house with her dysfunctional parents and younger sister, Kasey. Alexis may dye her hair pink and disdain most of the people at school, but her Kasey seems to be REALLY crazy: she has an unhealthy doll-collecting obsession, and has recently been acting weird, alternately crying tearfully and acting unlike herself. Almost as if she were…possessed.
Alex is further convinced that something’s not right with Kasey when strange things start occurring in the house: doors open and close on their own, appliances turn on all by themselves. With the help of unlikely new friends—Megan Wiley, the head cheerleader at Surrey High, and Carter Blume, the popular new kid whom Alexis might like more than she should—Alexis is going to find out what the evil spirit that seems to be haunting Kasey and inflicting harm wants.
If she can manage to do this without be killed.
Review
Be forewarned: don’t read BAD GIRLS DON’T DIE at night, or you will feel the goosebumps on the back of your neck long after you reluctantly put the book down! Katie Alender’s debut YA novel is deliciously creepy; imagine the movie The Sixth Sense in novel form, and you can get an idea of what this book was like.
Alexis kicked butt as a protagonist; if Jessica Darling had a young sister who turns the popular crowd upside-down and unfortunately finds herself in a ghost story, you’d get Alexis. The majority of the story centers around the evil ghost’s mystery, which occasionally leaves the characters slightly incomplete, at least in my opinion. I would have no problem reading a hundred extra pages in order to better understand important characters such as Carter, Megan, Kasey, Alexis’ parents, and the ghost’s history and motivation.
Despite the sometimes overwhelmingly fast pace of the novel, however, BAD GIRLS DON’T DIE is truly a remarkable read, destined to send shivers down your spine.

Email ThisBlogThis!Share to TwitterShare to FacebookShare to Pinterest
Labels: 4, katie alender, review, YA