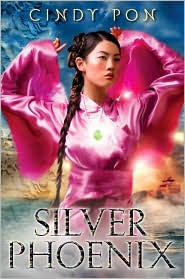 Ai Ling has always led a straightforward life, but that all changes when first her betrothal is broken off because she’s “unacceptable” and then her father does not return from a trip to the Palace of Fragrant Dreams. Determined not to stay at home and worry like a good female, Ai Ling sets off to the Palace to find out what happened to her father.

Along the way she meets Chen Yong, a half-foreign young man who is also on the way to the Palace. Not all the company Ai Ling happens upon are as good as him, though; in fact, Ai Ling and Chen Yong find themselves repeatedly engaged in battles with fierce demons that neither of them had ever believed existed. It seems as if Ai Ling is not the ordinary girl she thinks she is, and that something is definitely trying to prevent her from achieving her goal. Armed with her friends, the Immortals’ help, and the power of her legacy, however, Ai Ling just might be able to overthrow the dark forces at work and succeed.

SILVER PHOENIX is first and foremost a nonstop tale of fantastical adventure. Demons and mythical places pop out of the pages nonstop, and so there is an almost constant stream of butt-kicking, done by an extremely appealing heroine. Ai Ling is an enviable protagonist, with her neverending arsenal of abilities. Even with all the unwanted problems that destiny has placed upon her shoulders, she forges on, not relying on others to do what she needs to get done.

The heavy reliance on evil creatures to move the plot along, however, is also what disappointed me about the story. The strength of the book lies in the imagined details, but not in the overarching story line. Characters fall flat in the face of such physical adversaries; almost all of the challenges that Ai Ling and Chen Yong face can be overcome with physical actions, leaving very little psychology and mental study in the story.

Despite the distance I felt from the characters, however, I know that SILVER PHOENIX will appeal to the tomboy who wants a different heroine and setting than the norm.

Cover discussion: 4.5 out of 5 - Can we say WOW. I have to admit that I was first attracted by the cover, and then the premise. Points for having gorgeous colors, a variety of textures, and an Asian model. Points OFF for making this, uh, slightly disturbing in an Asian fetish-y kind of way. This was definitely not how I pictured Ai Ling as I read the book, and I'm glad.
Posted by Steph Su at 6:21 PM