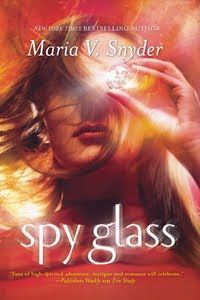 Glass, Book 3: Spy Glass by Maria V. Snyder
(MIRA / Sept. 1, 2010)
I really love all the covers for Maria's books. It's one of those series where I think I might end up owning a set of them published in every country, because they're all so beautiful! Maybe next time I'll do a cover lust post entirely on Maria's covers...

Back on track. I really like this one, although it's yet another example of whitewashing (damnit!). Maria says that the girl on the UK version of Spy Glass (to your left) most closely resembles her idea of what Opal looks like, and I agree. The US one looks really cool because of the colors and the lights, and it's such a drastic departure from the look of the first two books in the series, with their blues and this one's yellows and oranges, that it looks super cool. Can't wait to hold a copy in my hands!

Like Mandarin by Kirsten Hubbard
(Delacorte / March 2011)
The publication date for this one is a long way off, but Kirsten's cover was just released and has been making its rounds across the blogosphere. What can I say? I really like this one. The oversaturation gives a cool fiery feel to the otherwise average model. I like the placement of the title, as well as its font and color choices. But most of all, I LOVE the white space. White space is something that, when used carefully and sparingly, lends a supremely professional, yet alluring, look to the whole thing. And I think it's used wonderfully here. A definite YES for me!

Here's a synopsis of Like Mandarin if you haven't heard of it yet:

It's hard to find beauty in the badlands of Washokey, Wyoming. Fourteen-year-old Grace Carpenter knows it's not her mother's pageant obsessions, or the cowboy dances and pickup trucks adored by her small-town classmates. True beauty is wild girl Mandarin Ramey: seventeen, shameless and utterly carefree.

When the two misfits are united for a project, they embark on an unlikely, explosive friendship, packed with nights spent skinny-dipping in the canal, liberating the town's animal-head trophies, and constantly searching for someplace magic. Grace even plays along when Mandarin suggests they make a pact to run away together. Blame it on the crazy-making wildwinds that plague their badlands town.

But all too soon, Grace discovers Mandarin's unique beauty hides a girl who's troubled, broken and even dangerous. And no matter how hard Grace fights to keep the magic, even the best friendships can't withstand betrayal.

One Night That Changes Everything by Lauren Barnholdt
(Simon Pulse / July 6, 2010)
Lauren Barnholdt is always good for a quick and cute read (heard of and/or enjoyed Two-Way Street? She wrote it!), but this cover absolutely took my breath away. It is so cool: the sharp yet shadowed silhouette of the girl walking barefoot, heels in her hand, on what could possibly be a rain-soaked street, thus justifying the reflections of the brightly colored city lights in the blurry background. The whole image just looks very sharp, very "professional photography", which I guess I'm a sucker for. *grins*

The synopsis for this book took a long time to dig up, so I hope you enjoy it!

Eliza is in a full-blown panic. Her notebook has been stolen—the one that lists everything she wants but is afraid to go after. And the absolute worst person in the world has it: her ex-boyfriend, Cooper.

Like it’s not enough Cooper was lying to Eliza for their entire relationship, now he and his friends are blackmailing her. They’re giving her just one night to complete the most humiliating tasks on her list or they’ll post her secrets online—including the ones that aren’t just about her.

Eliza’s sure of only one thing: she isn’t going down without a fight. Cooper may have what’s left of her dignity, but she’s not the only one with something to hide....


So what do you guys think of these covers? Or, more specifically, what do you think of brightly colored unfocused lights/colors? Of white space?
Posted by Steph Su at 5:15 PM