A couple weeks ago I wrote a post in which I broke down the rating system I use on my blog. It started as a way for me to collect my thoughts, but I really enjoyed the comments that people left on that post for me. It was fascinating to see all the different points of view; it just goes to show that, while we all love YA and reading, there are still a ton of differences among us, and no easy answer as to how to go about reviewing!

Today I want to talk about how I use ratings when looking for recommendations, surfing book networking sites, reading blogs, etc. I'm not sure how I'm to unify this post, so I think I'll do it in interview format, ask myself questions and answer myself. Let's see how this goes! 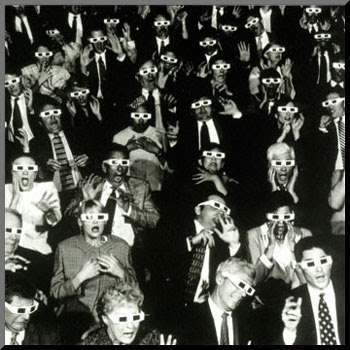 Audience: When you rate books, who do you rate them for?

(The picture on the right makes me giggle, btw.)

Well, that's the ultimate question, isn't it? Obviously we're all blogging with the small hope that someone out there will read our words. But it's perhaps also true that different review publications have different purposes when reviewing, and that understanding the publication's purpose goes a long way in the way in which we take its reviews. Or, in Lauren of I Was a Teenage Book Geek's comment in my first post, it's all about the CONTEXT.

Notable review publications such as Kirkus, Publisher's Weekly, and School Library Journal cater to professional buyers of books. That means they're nice and concise, with only a few sentences of synopsis and review. These publications usually give the "starred" reviews that most authors and publishing companies consider really good, because this will bring the book to the attention of professional booksellers. These reviews generally mean less for the everyday consumer, and are generally not self-reflective: these publications don't have a "type" of book they give starred reviews to over others. Their reviews are written by a bunch of people, and so if one of them thinks the book is worthy of being placed in libraries, schools, book fairs, and more, the star will most likely be given.

This is opposed to many bloggers' reviews. We have the same goal of promoting good books to others, sure, but reviewing is also a reflective process for most of us: writing our reviews helps us understand what we like or dislike in books. At least that's what I've found to be the case with me. My blog is self-reflective: I know that some books I give 3-star ratings to are others' all-time favorites and/or extremely popular and/or generally raved about by consumers and professionals alike. But part of my rating process is figuring out how I enjoyed that book in relation to others I've read. My reviews can be influenced by what I read before and after. That's because I am an individual: I do not profess to hide behind a professional reviewer or site name (note my eponymous blog). Knowing that my reviews should be taken in the context of MY reading tastes will help you a lot when deciding whether or not reading my reviews is worth your time.

Do you look at star/number/grade ratings, or do you read the review and glean from it what you will?

I confess: I usually look at the star/number/grade rating first, then go back and read the review if I think I'll get something out of it. I know there are those of you who completely disregard the rating. But for me, ratings help ground me somewhere: I have a starting point for myself when I read the review. And once again, it's all about the context. Lenore doesn't use ratings on her reviews, but her Zombie Chickens for Dystopian February worked wonderfully because it was a unified theme: all dystopian books! Along the same lines, if it's someone who gives everything 5 stars, I usually don't even bother to read their reviews. They usually don't tell me anything about the quality of the book, only that they really really really really liked it. Really.

Where do you go to read reviews?

If I'm trying to decide whether or not I want to read a particular book, I usually go to Goodreads. Check out the book's overall rating, read several differently starred reviews, some from my friends, some from people I don't know. It's dangerous for me to get my expectations too high about a book (damn you, you bloggers who only write gushy-gushy 5-star rave reviews!), and so I like to read about both its strengths and weaknesses beforehand.

When I'm looking for new book recommendations, I tend to troll the blogs. (Hehe, "troll" the blogs. I didn't have to say that, but I just wanted to say it. Hehe.) Bloggers pretty much find sooner or later that there are a certain number of blogs they really connect with, whose reviews they truly take to heart. Just like a book is not for everyone, so a blogger can't be a perfect fit for everyone. I have a handful of blogs whose reviews I love reading for the fact that A) they are well-written, AND B) they have similar reading tastes to me. The "AND" is in important because a blog can be A and not B, or B and not A, and while I'll still read their reviews, they don't have as much of an influence on me as the A AND B blogs do. Troll the blogosphere (hehe, "troll"!!! I'm stopping now) long enough, and you'll find which blogs you enjoy and which ones you don't. Blog-reading is a personal affair, and you have the right to love a blog that others don't, or hate one that everyone gushes about. Just don't go aggressively public with your likes and dislikes.

I find that I don't read Amazon reviews often. I'm irritated by the way they set it up so that Vine readers or reviewers who post their reviews up as soon as the book is released have the best chance of appearing on the main page. I've found no good way of browsing the reviews, and I barely look at the ratings. I guess, for me, Amazon is really more a place I go for technical information--synopsis, release date, publisher--than for recommendations, although I'm thinking some authors might disagree with me.

Question from Ari: Are there ever books you regret giving them the ratings you did?

Ohh, this is a difficult question. Like I mentioned earlier, my reviews are invariably influenced by what I read before or after. I think this is hard to help: like, you think you like a book, and give it 5 stars, but then you read another book that so blows the first one away that you should you could give it 6 stars, or change the first book's rating to a 4. Also, reading tastes change over time: I realize that a lot of my 5-star ratings on Goodreads are carryover ratings from books I read over and over when I was younger. Most of them I probably wouldn't read again, and if I did, I'm not sure if I'd feel the same way about them. But will I change my rating? Usually not--and if I do, then not by much, perhaps a half star in either direction. (Except for Twilight. But that's a different story.)

As for whether or not I regret giving the ratings I did... Well, oftentimes I feel really bad about the reviews I've written for books I reviewed for blog tours that I didn't end up enjoying. Reading disappointing books is not a pleasant experience for anyone. Why should we have to read a book if we don't like it? (And also, why was it published in the first place? Grrr.) So I feel sad and rather masochistic when I have to put up a critical review of a book that was given me for review, and which I had to review for a tour. I wish I had known earlier that the book wouldn't be for me, so that I wouldn't have had to spend my time and my blog readers' time on that critical review. But do I regret the ratings I've given? No.

If you could start over with a new rating system, what would you do?

I'd very much like to play with the idea of using no ratings, and instead only giving, like, a big fat star or something for the books that I found exceptional. In that sense my reviews would be more like a Kirkus review, I suppose, which I'm not sure is the point of blogs. Eh. But that would allow me to point out the stellar books in the genres that I don't usually read. I just read this one book that my middle school self would have absolutely adored and probably reread about seven times. But my now-self couldn't justify giving it more than 3 stars...even though it's such a good book for middle school girls. With a "starred review" system, I could just write that--that it's something fantastic for tweens--in my review, and give it a star for being the top of its genre, and everyone would be happy and no one would go, "Oh, 3? Well, Steph gave it a mediocre rating. I'd better stay away from it then..."

But the problem is I like looking at ratings, as I stated earlier. Ah dear. The endless dilemma.

Now that you've heard from me (again), I have a few questions for YOU! Feel free to answer them in the comments below if you're interested, thanks! Reviews and ratings are an everchanging topic, and I have a feeling this won't be the last post in this series on ratings, as I completely didn't touch upon how authors/publishers may use reviews and ratings... :)

How do you use Amazon reviews?
Where do you go to read reviews and ratings?
Do you ever go back and change your ratings?
Who do you rate your books for?
Posted by Steph Su at 11:46 AM