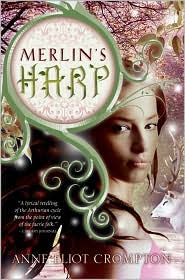 Nivienne lives among her Fey kin on Apple Island, known to humans as Avalon. She’s the daughter of the Lady of the Lake and an apprentice to Merlin, the half-human, half-fey sorcerer who knows King Arthur. Turmoil in Arthur’s kingdom threatens to affect the fey, however, and Nivienne must use her cunning and knowledge to navigate the treacheries of human men.

I don’t get offended by books often. Premarital sex, abstinence until marriage, drinking, backstabbing, pranking, people killing people, etc.—everything is good in my opinion as long as it’s written well and doesn’t sound like an agenda that is out of place within the fictional world. MERLIN’S HARP, however, is a mess of a novel, poorly organized and weakly characterized—unfortunate, because the writing is beautiful and the story held such promise.

For a generation that’s being bombarded with a multitude of sensations, experiences, and information left and right, we need stories that are far more organized—less ADD—than the lives we lead. The story of MERLIN’S HARP is exceedingly difficult to follow. It is almost impossible to tell without dedicating 110% of your brainpower to the task whether Nivienne is narrating something that’s occurring in the present or something that happened in her past—and if it is the latter, which part of her past it occurred, as, yes, she somehow attempts to provide us with multiple flashbacks at once. And it’s less than lack of chronology throughout the story as it is the fact that the flashbacks (or whatever we should call them) provide us with hardly any cohesive information about either the characters or the world in which the story is set.

Crompton’s fey are fairly dissimilar to humans: they’re heartless, free-spirited sexual beings. They would’ve provided an interesting contrast to human characteristics, had their lustful behavior been better developed. I have nothing against any kind of sex in fiction, but when characters are objectifying and rubbing up on one another left and right without first having been developed into characters whose lustful actions are justified, then I DO have a problem with that. MERLIN’S HARP is a very sensual read, but my difficulty in connecting to any of the characters, of understanding their motivations, makes it an awkward read at best.

Overall, I’m afraid MERLIN’S HARP is yet another example of a book that is being marketed to the wrong genre. Readers of adult fantasy may be better suited to appreciate its slow story, meandering plot, and sensual writing. YA fantasy fans, however, may find this book difficult to get through.


Cover discussion: 3 out of 5 - I don't believe the cover has very much relevance to the story--the model is too pretty, and not inhuman and slightly intimidating like the fey in this book are--and it's a shame, because this cover is quite pretty. Love the mixture of greens and pinks, a combination you wouldn't think would work as well as it does here.

Want to check out what others thought of this book? Here is the blog tour schedule: