Review: This Book Isn't Fat, It's Fabulous by Nina Beck 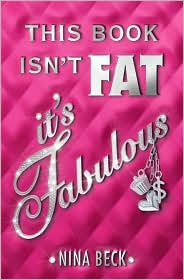 Manhattanite Riley Swain is not your average It Girl. She’s heavy, she has no problems with the way she looks, and she’s got attitude. When her parents force her to go to fat camp for spring break, Riley panics and lies to her best friend/crush, D, about it. Fat camp in upstate New York is pretty awful, but before she even realizes it, Riley has made some good friends, and may even have something special going on with the program director’s son, the adorable, punk-rockish Eric. As she and Eric get closer, however, Riley’s NYC friends are in danger of finding out where she’s been. How will Riley choose between her old, amazing life, and the possibility that change may bring about even more amazing things?

Try your hardest to not judge this book too much by its title and cover, otherwise you’ll miss out on one of the most winning protagonists I’ve ever come across. Riley carries the rest of the wonderful “cast” of characters in a book that’s hilarious, inspiring, and totally swoon-worthy.

I wish we could have more characters like Riley in YA lit. This girl knows what she wants, and she doesn’t wait for others to give it to her: she goes for it herself. Riley’s confidence makes her a wonderful role model, while her insecurities—most of them having to do with her family and a little bit with her reputation—make her realistic so that she is easy to relate to.

It wouldn’t be right if I don’t mention that this is one of those rare books with a heavy protagonist that isn’t about having low self-esteem or trying to lose weight. Instead, Riley is comfortable with her body, making this book as the title suggests it is. Much like how I want more books featuring Asians that are not about the struggles of being Asian, so I think many readers will adore this book for giving them a fabulous plus-sized heroine to root for.

Riley and Eric’s romance is so adorable it would be a sin for me not to talk about it. Again, Eric is quirky, confident, stereotype-breaking, and so dedicated to Riley it’s hard not to be jealous of her. Theirs is a head-over-heels flirtation that will likely make the most hard-hearted of us squeal with pleasure and want to form an Eric Hotra fan club.

The bottom line? Don’t misjudge this gem of a novel. It’s got a little bit of something for readers of all ages, sizes, backgrounds, and story preferences. As far as contemporary YA fiction goes, this book is one of the strongest out there. I highly suggest you find a copy and check out this fun and touching story for yourself! 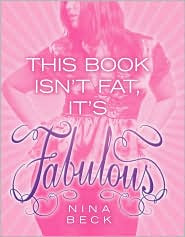 Cover discussion: 1.5 out of 5 - Neither this nor the original hardcover image (to your left) managed to capture the essence of this book, in my opinion. I totally dismissed this for ages until Lenore mentioned it on her Unsung YA list. Doesn't it give off the impression that it'll be...I dunno, ditzy?

Picked up on Lenore's recommendation, borrowed from library.
Posted by Steph Su at 10:30 AM

Email ThisBlogThis!Share to TwitterShare to FacebookShare to Pinterest
Labels: 4, nina beck, review, YA