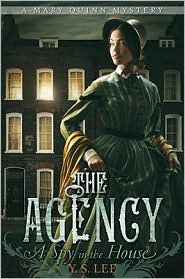 A young, destitute woman living in Victorian London doesn’t have many choices available to her. So when young Mary is rescued from the gallows by a charitable boardinghouse/school for girls, she never dreamed that the school could be the headquarters of the Agency, an ultrasecret women’s detective agency.

Mary’s first assignment is to infiltrate the Thorold household as a female companion for the daughter, Angelica, and learn what she can of Thorold’s suspected illegal commerce activity. However, she soon realizes that few members of the Thorold household are who they seem. With a deadline quickly approach and her reconnaissance activity constantly being interrupted by the infuriatingly snobbish James Easton, Mary must begin to face her past if she wants to get down to the bottom of the Thorold mystery.

Look out, Sherlock Holmes—yes, you, the one played by Robert Downey, Jr. in the 2009 film. Smart, dark, and flavorfully kickass has a new name, and that name is Mary Quinn. Y. S. Lee has crafted a superbly entertaining historical fiction mystery novel that contains cross-genre and ageless appeal.

The characters in A SPY IN THE HOUSE are delightful to read about—not because they are extremely angelic, but because of the fact that they’re all keeping secrets, all trying to outsmart people who are trying to outsmart them. Mary shines best in her barbed banter with James (who arguably gets sexier with each of their encounters and conversational exchanges), but she is also wonderfully resourceful, yet wounded. Without giving a major characteristic away, I just want to say that Mary’s shame of and complex about her past make for a refreshing new take on Victorian fiction, one that should not be missed.

I loved how the darker, grimier aspects of Victorian London were portrayed in this novel. Y. S. Lee shows her knowledge about this time period in the way the setting, and the major characters’ encounters with less savory minor characters, never gives in to sensationalism. Instead, the details are deliberate, the mystery neither predictable nor overdone.

The result is complete: we are fully immersed in this atmospheric yet modernly appealing historical fiction novel. Y. S. Lee shows that she is a talented author capable of writing an intelligent yet entertaining story with a mystery and romance that will keep our toes curled and our eyes on the page.


Cover discussion: 3 out of 5 - I love that it exudes a sort of Frances Hodgson Burnett / Louisa May Alcott 19th-century feel--even though I'm a little disappointed that the model doesn't quite look like how Mary should look (though I can't say more here cuz that would be a spoiler).

This review and the forthcoming interview with the author is brought to you by Traveling to Teens.
Posted by Steph Su at 9:00 AM