Thanks to Big Honcho Media, I had the opportunity to interview Julie Kagawa, debut author of the marvelous book The Iron King, which I shared my love for yesterday in a review. Read on to learn more about Julie, the book, and more, as well as for a giveaway! 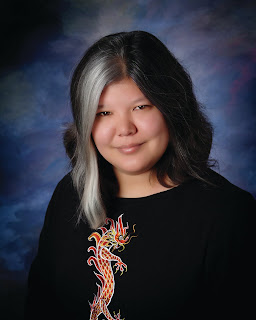 1. The Iron King is packed full of intricate details about the faery world. What kinds of research went into the writing of this novel?

Mostly online research, but I did read a few 'fairy encyclopedias' and an awesome graphic novel called Courtney Crumrin and the Night Things by Ted Naifah. So deliciously creepy, I loved it. I avoided books like Holly Black's Tithe and Leslie Livingston's Wondrous Strange because I didn't want to unconsciously copy them. But once I finished Iron King, the first thing I did was to read Tithe, which was awesome.

2. I thought Tithe was awesome too! Can you tell us a little about your querying and selling process? How long did it take for you to perfect your query letter, and from there, to sign with an agent and then have your book sold?

Oh goodness, lol. That's a long story. Condensed version: I had been going to a yearly writer's workshop for almost ten years, and at the end of a week of classes, agents and editors would come in and you could pitch your book to them. This is how I met my agent, Laurie McLean. Back then, I'd written an adult fantasy, which Laurie liked enough to decide to represent me. (Thanks, Laurie!) However, that book never sold, and after a year of trying to sell it with no luck, Laurie told me to work on something else. So I did. I wrote The Iron King in a little under two months, and Harlequin Teen, who was just starting to cast its net for new submissions, bought it a few weeks later.

3. The love triangle in The Iron King is so well done! What are some of your favorite fictional love triangles?

Well, I haven't read The Hunger Games yet (I know, I know!), so I can't say Katniss/Gale/Peeta. And some of my favorite love triangle aren't from books. I'll just name them and see if anyone recognizes them:

4. I'm proud to say that I know 75% of those love triangles you mentioned. So who was your favorite character to write?

Grimalkin was easily the most fun, though he wasn't even supposed to be in the book as much as he was. His original part was to be Meghan's guide to the Seelie Court and that was all, but somehow Grim kind of strolled back in and took over. And stole all the best lines.

5. For me, The Iron King stands out from the pack because of its snappy, oftentimes hilariously snarky dialogue. What things/people/events in your life contributed to your memorable sense of humor, its genuineness still so rare in literature today?

Lol, thank you, though there have been many on the receiving end of my humor who have not been as appreciative. ;-) I'm not sure where it comes from, really. I do remember watching Buffy and being highly amused and impressed by the snarky comebacks the show was famous for. Also, I have a bit of a prankster streak (which is where Puck gets it, apparently), so I like jokes and making people laugh. (Okay, so mostly I laugh) I do love books with humor in them; if a story can make me laugh and cry it goes on my shelf of absolute favorites.

6. What is your dream vacation spot?

At the moment, it's Japan. I've wanted to visit for forever. But I also want to travel Europe, Scotland, Ireland, Greenland, Australia, Alaska, Greece, all over the world, really. Oy, so many places to see, so little time.

7. And now, moving on from faeries: would you rather go on a dinner date with a vampire or a werewolf? Which vampire/werewolf would it be with?

Oh, a vampire, definitely. Better table manners. And if I had to choose my date, it would be Kaname from Vampire Knight. Sorry, Ed, Damon, and Eric. My perfect vampire is Asian. :P

8. Ooh, Kaname. I highly approve. :) After the Iron Fey series, what are some things you'd like to write about?

Actually, my new series after Iron Fey is going to be about…vampires! And after that, who knows? Maybe dragons or demons or pink kangaroos. The sky's the limit, really. I'll just have to see. :)

Thanks for the interview!

Thank YOU, Julie! And I now have an incentive to blog about Vampire Knight in the future... watch out! The next book in the Iron Fey series, The Iron Daughter, is coming out in August from Harlequin Teen, but if you can't wait that long, there is a FREE Iron Fey e-book novella called Winter's Passage coming out on June 1. Check it out!

Now, onto the giveaway...

Big Honcho Media is awesome enough to offer one (1) finished copy of The Iron King to give away to one lucky winner! This giveaway is open to US only, and ends Monday, June 7, 2010. To enter, fill out the form below; be sure to answer the entry question. Good luck!