Review: The Beautiful Between by Alyssa B. Sheinmel 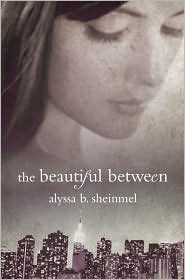 Connelly Sternin and Jeremy Cole have little in common. For one thing, Jeremy is at the top of the popularity chain, while Connelly keeps more to herself. Their lives don’t cross…but when they do start talking, they strike up a friendship that Connelly can make neither heads nor tails of. Can his newfound attention towards her have something to do with Connelly’s father, who died when she was very young and whose death is still a mystery to her? What secrets are Jeremy hiding from her?

I have to give credit where credit is due: I’m absolutely flabbergasted with how whoever wrote the synopsis of this book managed to twist it in a way that has absolutely nothing to do with the real story whatsoever. Seriously, that sort of twisting is an incredible accomplishment, a fabulous marketing ploy. For THE BEAUTIFUL BETWEEN is nothing close to what it sounds like it would be about, and it’s left me disappointed and even frustrated.

Most unforgivably, the characters and their interactions with one another felt extremely artificial. I get the feeling that the author tried to present Connelly as the quiet and reserved teen bookworm who has more to her than her classmates realize, but the fact of the matter is that she never grows in the reader’s mind beyond a sullen and passive girl whose fairy tale extended metaphors get tiring and trite within the first 30 pages. She only waits, waits, waits throughout the whole book for Jeremy to show up when he needs her, and even then he never treats her as a good friend, but more like a sounding board for his cryptically “thought-provoking” musings. Jeremy, who’s supposedly this popular and nice guy but whose behavior towards Connelly only make him seem like a tool, using her to get the empathy he thinks she can give him.

Indeed, neither Connelly nor Jeremy (nor, actually, any of the other characters) feel like they’ve been fully realized: there’s something about their motivations, actions, and words that never quite line up. They are like cardboard figures acting the part of emotionally distraught, history-laden high school classmates in different social strata drawn together by mutual experiences and emotions. As a result, we can only read about them as if they’re 500 miles away on the other side of a bulletproof, shatterproof foot-thick glass wall.

It is furthermore unclear as to what this book’s main purpose or point is. The book jacket synopsis makes it sound like it will be about the healing powers of a blossoming relationship between Jeremy and Connelly. Instead, the plot waffles between Connelly’s long-suppressed desire to find out what happened to her father, and Jeremy’s “secret,” which, when finally revealed, is built up so insufficiently and artificially that I was more disappointed than sympathetic (a sad thing indeed, as the secret is actually quite sad). The ending wraps things up fairly neatly—which is a mixed blessing: it ties things up before we are ever connected with the story, but, at less than 200 pages, we are already ready for the blandness to be over.

I’m going to stop here before I get really pissed off, because this is pretty much like the realistic fiction version of the passive-heroine/wish-fulfillment-male’s-attention trope that too often pervades paranormal romance (only this one supposedly has a family emotion twist that makes it more “valid”). I’m pretty angry when I think about how undeveloped characters can masquerade as deep people if you just throw the right unconventional heartwrenching problems in. A book has to be more than the sum of its parts, and even though this one might have the right parts—an introverted bookworm protagonist (so, y’know, we can relate to her), a heartthrob nice guy (so, y’know, we can like him, and like him with her), and a deep familial problem (so, y’know, we can sympathize with the characters’ troubles)—it doesn’t ever come together.


Cover discussion: 2 out of 5 - I wish I could like the gray tones more, as I think it's actually a rather evocative cover--but if I think any more about this book I might want to hit something, so I'm not.

Review copy sent by publisher. (Sorry.)
Posted by Steph Su at 11:45 AM

Email ThisBlogThis!Share to TwitterShare to FacebookShare to Pinterest
Labels: 1.5, alyssa b. sheinmel, review, YA