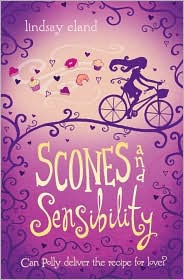 12-year-old Polly Madassa is more often than not living inside her head, where she can be a romantic heroine like Elizabeth Bennet or Anne Shirley, instead of the daughter of two bakers in a small New Jersey oceanside town. Despite having to spend her summer delivering baked goods, however, Polly decides that she will also exercise her romantic sensibilities and love matches for her best friend’s single father, her neighbors, and her older sister, whose current boyfriend is far from ideal. Things in real life don’t usually work out the way they do in books, though…

SCONES AND SENSIBILITY, Lindsay Eland’s debut novel, introduces to us a quirky yet endearing heroine who will probably remind us all too well of ourselves, especially if you are, too, a fan of Anne Shirley and Elizabeth Bennet. Its romantic affectations may make it appeal more to older readers instead of its intended middle-grade audience, but readers of all age will be able to laugh at Polly’s misconceptions and mistakes, and smile as she grows up and discovers the difference between fiction and reality.

Polly’s voice and narration—so influenced by what she feels is a more romantic way of talking—is the make-it-or-break-it element of this book. I can certainly recall many moments when I wish my life were like Anne Shirley’s, or that I lived in Anne’s world, where mishaps lead to endearments, and every girl found a horribly romantic and swoon-worthy Gilbert Blythe-esque figure. On the other hand, I also never actually allowed myself to talk in the way Polly does, because I probably would’ve been laughed out of the state. Polly’s overuse of “indeeds,” “trulys,” and other words may get on readers’ nerves, even those who liked Montgomery and Austen’s writing.

In a way, Polly exists in her own little world that’s difficult to place in a contemporary setting. She’s a 12-year-old growing up in 21st-century America, but her speech and her social concerns aren’t anything like what I remember thinking about when I was 12. Polly’s romantic imagination makes her sound younger than her age, and yet the language of the book may be slightly more sophisticated than the age of readers who’d perhaps find Polly the most entertaining.

SCONES AND SENSIBILITY, then, is most fun in a retrospective sort of way. Readers who will be able to best enjoy Polly’s adventures will be the ones who can still remember the magic that Green Gables and Regency England held for them, but are old enough to have some distance from their childhood infatuations. It’s a challenging book to market as a result, but if mothers buy this book for their daughters, they’ll surely be able to enjoy it themselves as well.


Cover discussion: 3.5 out of 5 - It's adorably whimsical. Love the big, bold, yet romantically girlishly fun colors.

Copy received from publicity company as part of blog tour. Interview with Lindsay coming soon!
Posted by Steph Su at 10:00 AM