What Makes a Bestseller?

For the past, oh, six months or so, I've been curious as to what makes  certain books bestsellers. I know it's not any one single element, but rather a variety of factors: publisher's interest, commercial viability, story idea, marketing, author blurbs, early buzz. Bestselling books aren't always the most well-written ones (no one would call James Patterson or Dan Brown "literary treasures": their books are the most recyclable ones on the market). Sometimes they don't even send good messages. Early buzz can only get you so far, as we have to be realistic and remember that the majority of the audience that publishers are aiming for with their products isn't book bloggers or fellow authors. We are, in the end, only a sliver of book buyers out there. And even book bloggers can only sway the book-buying market so much. Some of my favorite books aren't bestsellers, even though I wish they would be, and think that they are better than 90% of what's on the NYT bestselling list or whatnot.

So what makes the average book buyer, one who does not spend hours a week on blogs, who doesn't subscribe to Publishers Weekly or Shelf Awareness and follow the book publishing world, pick up a particular book over another at the bookstore?

That got me to thinking about the times in the past when I walked into a bookstore "blind"--with no knowledge of what was out there on the market. This is pretty much impossible for me to do anymore. Nowadays, I walk into my local Borders, head to the YA shelves, and find myself saying, "Yep, read that one.... have that one on my TBR shelf... have that one for review... read that ARC (but the finished copy is so pretty!)... heard of that one... never heard of that one (but it's old, that's why)." I watch the other shoppers around me peruse the shelves, observe which books they stopped on, which ones they end up grabbing. I bet 99% of them aren't book bloggers or in any way involved with the book publishing industry except as consumers... and yet they nearly always picked up the books that are or would become bestsellers. (For example, Lauren Oliver's Before I Fall gets good arm-cradle time.)

When I think about what I will call my "blind" book-buying experiences, two really good ones come to mind. The first occurred in spring 2005, when I was a high school sophomore. The second I think must have been spring 2007, my high school senior spring, because I had a car then. Both times I carefully browsed the YA shelves to buy with what little money I had books that I was fairly certain I'd enjoy. The first time, I bought three paperbacks; the second, I bought one hardcover.

Want to know which books I bought?

In spring 2005, I bought A Great and Terrible Beauty by Libba Bray, Tithe by Holly Black, and Uglies by Scott Westerfeld. In spring 2007, I bought City of Bones by Cassandra Clare.

At the time, I was, of course, unaware that these were or would be all NYT bestsellers (or close enough). I don't remember if they had the coveted and rare "The New York Times Bestseller" tagline on their front covers. So what made me pick these, of all the hundreds of books in the store, up and buy them? What is it about certain books that can make even a "blind" book-buyer subconsciously gravitate to them? 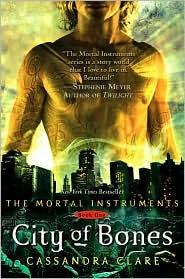 Placement, of course, helps. I used to go to the Barnes & Noble near my house, and they have this small table where they display recent paperbacks. I think they were also turned cover out on the shelves. I know I had to have been influenced at least partially by the covers--the greatest marketing tool. I remember being really enthralled by the covers of A Great and Terrible Beauty, Tithe, and City of Bones. And, of course, there are also the synopses and the lists of awards the book has won on the back (I think that helped a lot: I was a big fan of the YALSA Best Books for Young Adults list). Holly Black's author blurb on the cover of City of Bones definitely contributed to me picking that one up (but it was also a REALLY good blurb, and I haven't seen many equally as captivating since), but author blurbs didn't sway me on the first three. Quantity, I think, also has something to do with it: people are more likely to pay attention if there is a large number of the same books in one place.

So without even knowing it, I had done exactly what the publishers wanted me to do, and picked up the bestselling books, the ones that are still around to this day, still some of the best and most groundbreaking YA lit out there.

That can't have been mere coincidence, can it?

I'd love to hear from you about your own "blind" book-buying experiences and/or theories as to why certain books become bestsellers over others. Has this ever happened to you? Makes you pick up certain books over others at the bookstore?
Posted by Steph Su at 1:15 PM

Email ThisBlogThis!Share to TwitterShare to FacebookShare to Pinterest
Labels: discussion