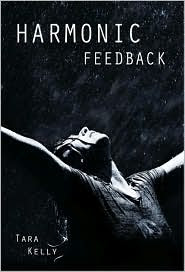 All her life, music lover and sound design master Drea has been treated differently because of her many perpetual diagnoses: ADHD and Asperger’s are just two of them. It’s true that Drea doesn’t get some things about social interaction—why do people lie? Why don’t people just always say what they mean?—but she would really like the chance to have others know her without her labels.

When she and her single mother move in with her stingy grandmother, Drea makes two good friends who share her love of music. Justin may even be more than a friend. But Drea cannot fully figure out the exuberant Naomi, who may have some serious problems of her own.

HARMONIC FEEDBACK has a unique voice and memorable characters. The few issues I had with plot and pacing paled in comparison to Tara Kelly’s resonant writing, which made this a lovely read for me.

Drea may have many labels assigned her, but we’ll all be able to recognize a bit of ourselves in her slightly eccentric, no-nonsense social awkwardness. The greatest thing is that her mental illnesses do not define her: this is not a book about a main character’s struggle with mental illness, but rather a story whose main character just happens to have these labels placed on her. Drea is always struggling to let other people know her without her labels, and the development of her relationships with the people in her lives—both new friends and old family members—is done extraordinarily well.

I found the plot to be a bit slow and circular after a while (just how many times can Drea, Naomi, and Justin meet up in different combinations with similar conversations without our attention wandering?), and the ending was jarring in its suddenness, but these are fairly minor issues compared with the strength of Drea’s voice and Tara Kelly’s writing. If you’re looking for a sweet contemporary read with a different protagonist, give HARMONIC FEEDBACK a try and be swept into Drea’s mind for a few hours. It’ll be a memorable experience, both pleasant and eye-opening.


Cover discussion: 3 out of 5 - I think I like the ARC version a little more: it's less dark, more like a real photograph. But the rain and the girl flinging her arms out like that is so cool. I'm interested in seeing this on the finished book.

Email ThisBlogThis!Share to TwitterShare to FacebookShare to Pinterest
Labels: 3.5, review, tara kelly, YA