I'm kind of dreading putting up what I got in these past two weeks, because... 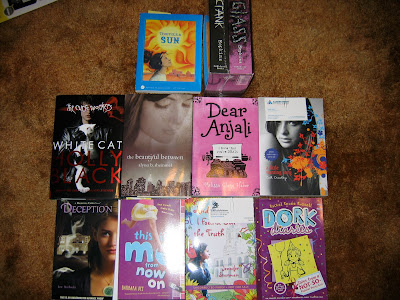 White Cat by Holly Black + swag - this came with some KICKASS swag, which I unfortunately had to leave behind in my apartment when I came home temporarily after the semester ended
The Beautiful Between by Alyssa Sheinmel - reviewed earlier this week. You know how I felt about it.
This Is Me From Now On by Barbara Dee - this looks and sounds cute; thanks, Barbara!
Tortilla Sun by Jennifer Cervantes - thanks, Jennifer!
Dear Anjali by Melissa Glenn Haber
Crank + Glass gift set by Ellen Hopkins
A Little Wanting Song by Cath Crowley - Thanks, Cath! Isn't that cover really pretty?
Deception by Lee Nichols - came for a tour, and it's pretty riveting
And Then I Found Out the Truth by Jennifer Sturman - I loved the first book, so I'm excited to have the opportunity to review this. Thanks, TK Public Relations!
Dork Diaries, Book 2: Tales from a Not-So-Popular Party Girl by Rachel Renee Russell 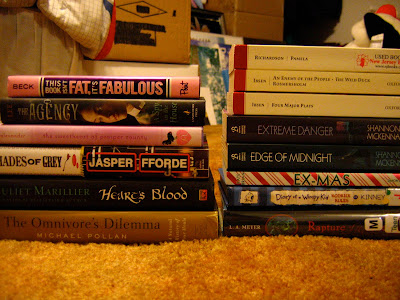 Pamela by Samuel Richardson - gotta read up on the epitome of the classic passive-female-rape-culture! Yay those silly 18th-century writers!
The Omnivore's Dilemma by Michael Pollan
Rapture of the Deep by L. A. Meyer
Diary of a Wimpy Kid, Book 2: Rodrick Rules by Jeff Kinney - I really enjoyed the movie, and am going to read this series soon

The above four were from a local library book sale.

The Agency, Book 1: A Spy in the House by Y. S. Lee
This Book Isn't Fat, It's Fabulous by Nina Beck
The Sweetheart of Prosper County by Jill S. Alexander

I've wanted to have these in my permanent collection for a while now, and over the weekend when I was miserable and housebound recovering from oral surgery, I just... gave in...

The last 3 were from a local used book place. 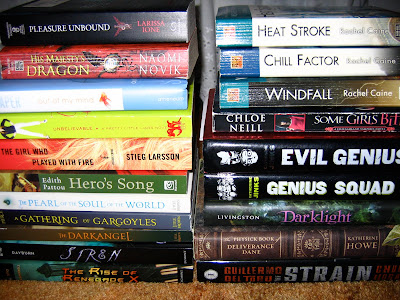 The Order of Odd-Fish by James Kennedy
Out Of My Mind by Sharon Draper
Siren by Tricia Rayburn
The Rise of Renegade X by Chelsea Campbell
The Girl Who Played With Fire by Stieg Larsson
Evil Genius by Catherine Jinks
Marcelo in the Real World by Francisco X. Stork
Darklight by Lesley Livingston
The Physick Book of Deliverance Dane by Katherine Howe
The Strain by Guillermo del Toro and Chuck Hogan
Magic Study by Maria Snyder
The Things That Keep Us Here by Carla Buckley
Heat Stroke by Rachel Caine
Chill Factor by Rachel Caine
Windfall by Rachel Caine
Pleasure Unbound by Larissa Ione
Some Girls Bite by Chloe Neill
Genius Squad by Catherine Jinks
Pretty Little Liars, Book 4: Unbelievable by Sara Shepard
His Majesty's Dragon by Naomi Novik
The Darkangel by Meredith Ann Pierce
A Gathering of Gargoyles by Meredith Ann Pierce
The Pearl of the Soul of the World by Meredith Ann Pierce
Hero's Song by Edith Pattou 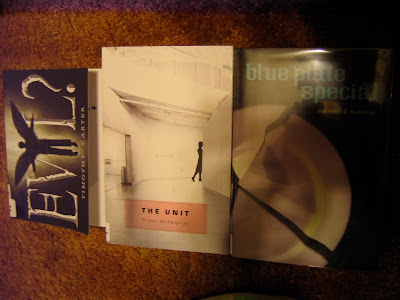 Evil? by Timothy Carter
The Unit by Ninni Holmqvist
Blue Plate Special by Michelle Kwasney
The Vinyl Princess by Yvonne Prinz (whoops, forgot to put that one in)

Yes, I am aware...that I have a problem. And that no matter how I look at it, there is no way I will ever get to every single one of these books. I blame Alaska Young. On the other hand, I've read 12 books since coming home last Wednesday (plus a lot of manga...). Unfortunately, in light of my book acquiring habits, this is the equivalent of removing an eyedropper full of water from the Atlantic Ocean.
Posted by Steph Su at 8:26 PM