It's officially the publication date for one of the most stunning 2011 debut books I've read so far: Lauren DeStefano's WITHER! I read Wither months ago, loved it, posted my review last week, and now am thrilled to talk it up to every YA reader. To celebrate this day, Simon & Schuster has compiled an awesome interview with the lovely Lauren herself. Read on to learn more about Lauren, Wither, and what we can expect next!

1. Your novel combines genetic engineering, polygamy, and super-low life expectancies to create an awesome storyline. How did the idea come to you?

I may never know exactly where it came from. This story is the culmination of many strange factors. I was bedridden with the flu, for starters, and I was getting frustrated with an adult writing project I had going. My agent suggested that I try something out of my comfort zone, something that I would normally never write, and she also linked me to a site that was taking short story submissions. I began Wither with the intention of making it a short story, and I had no idea where it would take me. Page one began with a girl in a dark place; she didn’t know where she was going, and she was scared. That girl turned out to be my protagonist, Rhine, and at the time she knew about as much of her story as I did.

3. If you could pair Rhine, Linden and Gabriel with any character from any book, who would your pick for each be?

I probably wouldn’t do that. It’s hard to imagine the characters in this world entering another world. But for Rhine, I would say that being paired up is the last thing she’d want. She’s a strong-willed girl who values freedom above all else; love is not something she’s ever thought to look for.

4. Can you tell us why you chose the title Wither, and how it correlates with Rhine’s story?

A: It was a title that the publisher and I generated from a long list, after the story had been through copyediting. It can be interpreted any number of ways, but for me it describes what’s happening not only to my characters, but to everything around them. Flowers, trees, crumbling buildings—it’s a world where everything is slowly dying.

5. How long did it take you to write Wither?

The first draft took about a month, which isn’t typical for me. I have some unpublished stories that have taken years to complete.

6. What can we expect from future books in this series?

7. I know that Justin Bieber and Paris Hilton were huge inspirations for Wither, but is there anything else? A song, another book, a place?

Just to dispel this up front: No pop singers or celebutantes inspired this story. But while I was going through some old books from my childhood last week, I found a copy of The Girl Who Owned a City by O. T. Nelson, which was about a mysterious virus that killed everyone over the age of 12. I was probably nine or ten when I read it, and I’m sure that planted a very early seed. I’m also fascinated by stories on the news about eradicating cancer genes or genetically modified foods, and loved the movie Gattaca. Somewhere in my brain is a spinning wheel that processes all of my life’s experiences and makes them into story ideas.

8. Is there any certain person who instilled the passion for reading and writing in you? A family member or a teacher maybe?

I’ve been writing for as long as I can remember. It’s something I’ve always enjoyed, and when I was young I didn’t give much thought to why I loved it, nor did I share it with anyone. I saw it as a private thing, like keeping a diary, except all the entries were fictitious. In fifth grade I was assigned to write a short story for school, and I remember my teacher pulling me aside and asking if I had ever considered writing books when I grew up. Before that moment, publication had never occurred to me, but as I got older I began to take the idea more seriously. 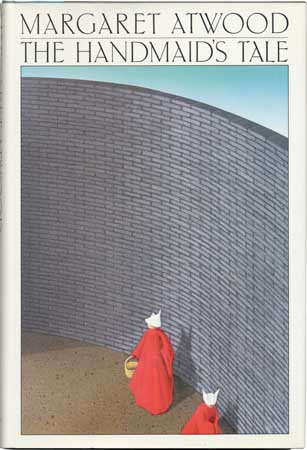 A: I have seen a lot of comparisons between my story and The Handmaid’s Tale, which frankly surprises me. I am a huge admirer of Margaret Atwood and would absolutely recommend her dystopian, but I think her story and mine focus on different topics and paint different worlds. As far as recommending dystopians, it would really depend on what the reader is looking for. The beauty of dystopian fiction is that it breaks the boundaries we’re used to; it makes us uncomfortable, and it makes us see our own world in a new light, and so I would only recommend, whatever dystopian each reader chooses, that it’s met with an open mind.

10. What are some of your favorite books that have had the biggest influence on your writing?

A: I’m not sure that other books are any more or less influential as anything else that might inspire me, such as a conversation or a crime documentary—I never really know what will trigger something. I once wrote an entire scene because of a shape I saw in a puddle.

This interview is provided by Simon & Schuster Children’s Publishing and can be reprinted for publication either in full or excerpted as individual questions and answers, as long as they are reprinted in their entirety.

If you haven't gotten a chance to read Wither yet, I highly recommend you get thyself to the nearest bookstore and pick up a copy. Be prepared for a beautiful and momentous reading experience that will be hard to forget.
Posted by Steph Su at 4:30 PM