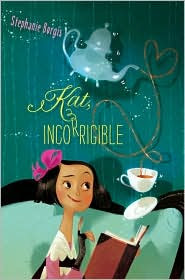 12-year-old Kat Stephenson wishes she could do something to help out her family. Her brother is in debt, her father is weak, her stepmother is borderline evil, her sister Angeline has been casting love spells that go awry, and her oldest sister Elissa might have to marry the sinister Sir Neville to save their family from ruin.

It’s a good thing, then, that Kat has inherited her mother’s magic skills. However, it’s hard to know who to trust, especially when it appears that there are people who might be interested in her family just for their magic…

If KAT, INCORRIGIBLE had been around when I was in middle school, it would’ve been my favorite book of ALL TIME. It has an amazing narrator and charm to the likes of which I haven’t seen since I read Gail Carson Levine’s Ella Enchanted for the first time in fifth grade (and which still remains one of my favorite books to this day).

Kat is undeniably the best part about this book. Unlike other historical fiction heroines I’ve encountered in the past, Kat’s modern-day stubbornness and rebelliousness feels perfectly natural. She is at that wonderful age when she can resist societal conventions without appearing petulant or immature, and she defies all our expectations, much to our endless delight. She has moments, for example, when she consciously refuses to act like the silly, spineless heroines in her sister’s favorite gothic novels, the similarity to some 21st-century YA lit too good to go ignored. It takes great skill to write a historical character with modern appeal, but Stephanie Burgis does it like she was born to write this.

The villains in this book may be rather straightforwardly sinister, but it works for its middle-grade audience, and besides, it’s the “gray” characters—the complex supporting ones—that showcase Burgis’ extraordinary talent for creating and developing characters. Kat’s older sisters, Elissa and Angeline, have distinct personalities and are enjoyable in their own way. Throughout KAT, INCORRIGIBLE, Kat struggles to figure out whom she can entrust her secrets to, and we can empathize with her confusion and suspicion as the adults circling her approach with a variety of motives.

KAT, INCORRIGIBLE charmed me into a place of childlike giddiness that I haven’t encountered in too many years. This deceptively easy read is actually rich with character development and possibilities for future books in the series. Without a doubt I would not hesitate to hand this out to every girl I know between the ages of 10 and 14, and I highly recommend you check this delightful book out, and fall under Kat’s benevolent charms. I can’t wait for more of Kat’s adventures!


Cover discussion: It's cute! Although admittedly not what I was expecting as a cover. Still, the more I've looked at it, the more I like it.

Received for review from Simon & Schuster. Thank you!
Posted by Steph Su at 7:30 PM