In My Mailbox is a weekly meme inspired by Alea and hosted by Kristi. Check out Kristi's post to see what others got in books this week!

A much more manageable week in terms of books got--but you should see the size of my "immediate TBR" pile... 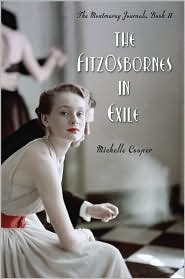 The Fitzosbornes in Exile by Michelle Cooper
(Knopf / April 5, 2011)

Michelle Cooper combines the drama of pre-War Europe with the romance of debutante balls and gives us another compelling historical page turner. Sophia FitzOsborne and the royal family of Montmaray escaped their remote island home when the Germans attacked, and now find themselves in the lap of luxury. Sophie's journal fills us in on the social whirl of London's 1937 season, but even a princess in lovely new gowns finds it hard to fit in. Is there no other debutante who reads?! And while the balls and house parties go on, newspaper headlines scream of war in Spain and threats from Germany. No one wants a second world war. Especially not the Montmaravians—with all Europe under attack, who will care about the fate of their tiny island kingdom? Will the FitzOsbornes ever be able to go home again? Could Montmaray be lost forever?

This is the sequel to A Brief History of Montmaray, which I have wanted to read. Has anyone read this series? What do you think of it? 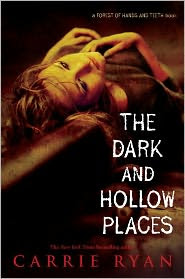 Annah's world stopped that day, and she's been waiting for Elias to come home ever since. Somehow, without him, her life doesn't feel much different than the dead that roam the wasted city around her. Until she meets Catcher, and everything feels alive again.

But Catcher has his own secrets. Dark, terrifying truths that link him to a past Annah has longed to forget, and to a future too deadly to consider. And now it's up to Annah: can she continue to live in a world covered in the blood of the living? Or is death the only escape from the Return's destruction? 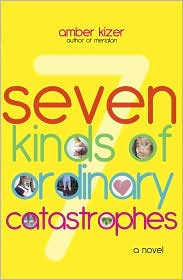 Okay, so here's the deal: there are books about volcanoes erupting and meteorites hitting Earth and plane crashes where the survivors have to eat people—those are extraordinary crises.

That's not what this book is about. I'm more the ordinary catastrophe type. This second semester of my sophomore year, there are basically 7 KINDS OF ORDINARY CATASTROPHES: high school, boys, heartbreak, family, job, friends, and the future.

Well, I guess everyone's life is full of ordinary catastrophes. These are mine. Hi, I'm Gert Garibaldi. Welcome to my crazy life.

It looks like this is the second in a series as well, the sequel to One Butt Cheek at a Time. 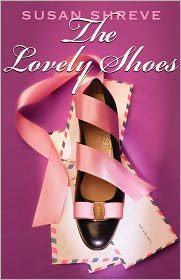 Can the right pair of shoes make anyone feel beautiful?

Franny is constantly embarrassed by two things in her life. One is her right foot, which curls in from a birth defect, so she has to wear ugly, heavy orthopedic shoes. And the other is her mother Margaret: beautiful, extravagant, flamboyant--mortifying, in their small Ohio town.

Franny's first school dance is a disaster, so Margaret announces her latest crazy plan: They will travel to Italy to meet Salvatore Ferragamo, who will sculpt a pair of slippers especially for Franny. The idea is outrageous. The trip is expensive. And the experience changes Franny's life forever. 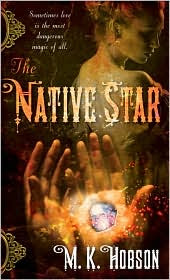 The year is 1876. In the small Sierra Nevada settlement of Lost Pine, the town witch, Emily Edwards, is being run out of business by an influx of mail-order patent magics. Attempting to solve her problem with a love spell, Emily only makes things worse. But before she can undo the damage, an enchanted artifact falls into her possession—and suddenly Emily must flee for her life, pursued by evil warlocks who want the object for themselves.

Dreadnought Stanton, a warlock from New York City whose personality is as pompous and abrasive as his name, has been exiled to Lost Pine for mysterious reasons. Now he finds himself involuntarily allied with Emily in a race against time—and across the United States by horse, train, and biomechanical flying machine—in quest of the great Professor Mirabilis, who alone can unlock the secret of the coveted artifact. But along the way, Emily and Stanton will be forced to contend with the most powerful and unpredictable magic of all—the magic of the human heart.

This sounds SO GOOD, and it's gotten great reviews as well. When reviewers mention the double whammy of great worldbuilding and witty banter, you can bet I'll be all over it! I can't wait to get into this.

Kit and Fancy Cordelle are sisters of the best kind: best friends, best confidantes, and best accomplices. The daughters of the infamous Bonesaw Killer, Kit and Fancy are used to feeling like outsiders, and that’s just the way they like it. But in Portero, where the weird and wild run rampant, the Cordelle sisters are hardly the oddest or most dangerous creatures around.

It’s no surprise when Kit and Fancy start to give in to their deepest desire—the desire to kill. What starts as a fascination with slicing open and stitching up quickly spirals into a gratifying murder spree. Of course, the sisters aren’t killing just anyone, only the people who truly deserve it. But the girls have learned from the mistakes of their father, and know that a shred of evidence could get them caught. So when Fancy stumbles upon a mysterious and invisible doorway to another world, she opens a door to endless possibilities….

Bought a copy for my perma-collection. :) My review is here. 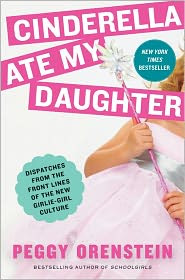 Cinderella Ate My Daughter: Dispatches from the Front Line of the New Girlie-Girl Culture by Peggy Orenstein
(HarperCollins / Jan. 25, 2011)

Pink and pretty or predatory and hardened, sexualized girlhood influences our daughters from infancy onward, telling them that how a girl looks matters more than who she is. Somewhere between the exhilarating rise of Girl Power in the 1990s and today, the pursuit of physical perfection has been recast as a source—the source—of female empowerment. And commercialization has spread the message faster and farther, reaching girls at ever-younger ages.

But, realistically, how many times can you say no when your daughter begs for a pint-size wedding gown or the latest Hannah Montana CD? And how dangerous is pink and pretty anyway—especially given girls' successes in the classroom and on the playing field? Being a princess is just make-believe, after all; eventually they grow out of it. Or do they? Does playing Cinderella shield girls from early sexualization—or prime them for it? Could today's little princess become tomorrow's sexting teen? And what if she does? Would that make her in charge of her sexuality—or an unwitting captive to it?

Those questions hit home with Peggy Orenstein, so she went sleuthing. She visited Disneyland and the international toy fair, trolled American Girl Place and Pottery Barn Kids, and met beauty pageant parents with preschoolers tricked out like Vegas showgirls. She dissected the science, created an online avatar, and parsed the original fairy tales. The stakes turn out to be higher than she—or we—ever imagined: nothing less than the health, development, and futures of our girls. From premature sexualization to the risk of depression to rising rates of narcissism, the potential negative impact of this new girlie-girl culture is undeniable—yet armed with awareness and recognition, parents can effectively counterbalance its influence in their daughters' lives.

This book came up in discussion in my Education seminar a few weeks ago, and I was intrigued. I wonder how the author will approach this interesting--and heated--subject.

So, what exciting books did you get this week that you think I should take a look at?
Posted by Steph Su at 11:48 AM