Today I am part of a blog tour for Maria Padian and her latest book, Jersey Tomatoes are the Best! Don't be put off by the odd-ish title and cover. Read on to find out more!

Henry and Eva are Jersey girls, best friends, and hardcore athletes. Henry is New Jersey’s junior tennis champion, and Eva is on her way to becoming a world-renown ballet dancer. Their friendship has sustained them through disappointments and demanding parents, but when they separate to go off to different summer adventures—Henry to a nationally ranked tennis academy, Eva to the ultra-competitive New York School of Dance—can their friendship last through their different experiences and some shocking changes?

JERSEY TOMATOES ARE THE BEST is a deceptively light contemporary story that delves into the darker side of sports without getting preachy. Whether you’re an athlete or not, girl or not, you’ll find something to enjoy in this moving yet fun novel.

Padian’s straightforward narration makes it very easy to relate to these Henry and Eva’s situations. Few of us may be on Henry and Eva’s level in terms of athletics, but it was still eye-opening to read about all the pressure they faced, the difficult choices they had to make. I thought that the girls’ relationships with their parents was a pretty shockingly true portrayal of some overinvolved, living-out-their-dreams-through-their-children parents. The parents were realistically overwhelming: I didn’t consider them exaggerations of the type, and instead could totally see this happening.

I am envious of Henry and Eva’s friendship. These two, equal in pretty much everything, such as skill, looks, and wit, still displayed normal feelings of envy or inferiority at times. It was clear that the girls cared for each other very much, and yet their lives were clearly not wrapped up in the other’s: they both have separate interests and dreams, after all.

Eva’s heartbreaking eating disorder will resonate with anyone who has felt insecure in their bodies, often for all the wrong reasons. The voice in her head that yells at her felt a little extreme to me at times, but I am not one to judge for the voice’s “accuracy;” I just recognize that this is something that definitely happens to people. Henry’s romance at tennis camp also felt slightly contrived at times. Again, however, it may be that that was the point: their relationship was inseparable from their budding fame as star tennis players. And finally, as a Jersey girl myself, I thought it felt a little weird and unrealistic whenever Henry and Eva “acted Joisey”: do people really do that? But hey, maybe they do.

These points didn’t detract from my engagement with the story as a whole, however. JERSEY TOMATOES ARE THE BEST is a solid contemporary read, one that I would highly recommend to people looking for a good book involving female athletes.


Cover discussion: It doesn't really stand out to me much, although I like the allusions to tomato-red and the girls' sports!

Copy received for review from publisher. 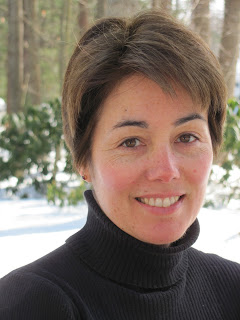 1. For a long time there have been few YA books about female athletes out there. Why do you think this might be so, and why do you think it is important to have sports books for girls?

I’ll confess: I have no idea why there aren’t more sports books with female protagonists! Back when I was growing up, and Title Nine was brand new (that’s the law requiring parity among boys and girls sports teams), most girls didn’t have the opportunity to compete athletically. Now, girls have wonderful opportunities available to them, not to mention marvelous role models (Misty May, Venus and Serena Williams, Danica Patrick, Mia Hamm ….) Plus, sports stories are exciting! So I really don’t understand why the literary world has been slow to catch on. Millions of girls play sports!

So for girls, I think it’s important to reinforce the notion that being strong and competitive is not inconsistent with being feminine. For boys, reading a book with a girl athlete as a protagonist might be a great first step toward better understanding girls.

2. How do you go about writing humor in YA?

That’s easy: listen to teenagers. Teenagers are hysterically funny. They are irreverent, edgy, honest, self-deprecating, quick on their feet, swift with comebacks … I could go on and on.

The humor in my novels comes from the banter between the teens, or from the wry observations my narrators make about their worlds. I live with teens, so their voices and their patter is fresh in my head. If I need a quick teen fix, I’ll volunteer to drive their friends somewhere. Now, there’s some fodder for a few novels. Pack a minivan with teens, and listen to them chat. Wow.

3. How do you balance the writing life with family life?

Hmm. Perhaps the members of my family should answer that one! My daughter claims that she knows I’ve had a “good” writing day when she returns from school and the breakfast dishes are still piled up in the sink …

I find it hard to balance writing with any other life at all. That’s because when I write, I need to sink, down deep, into my story and the lives of my characters. It’s very internal, and quite remote from the very busy world I inhabit with my husband and kids and dog, where meals need to be cooked, the shepherd walked, bills paid and laundry folded. Compartmentalizing is hard, especially if I’m “on a roll” on the computer, but someone needs to be driven somewhere … Some days I do a good job of balancing; others, not so good. I’m working on it.

4. What changes did Jersey Tomatoes undergo during revision?

During revision, the biggest changes came from cuts. My agent asked me to trim the first draft by a third. It was painful, and many, many words ended up on the floor. I’ll confess throwing a bit of a hissy fit about all the cuts, but my agent was right. The language became more vigorous and the pacing was better after cutting.

The biggest development that came about as I wrote was in the book’s structure as a two-narrator novel. Originally, this was Henry’s story, but as Eva became a character in her own right, I realized there was a lot more going on. By telling the story using two distinct, narrative voices in alternating chapters, voice itself became a theme. I realized I wanted to explore that inner voice we all have, because even more than events and outside circumstances, inner voice is determinative. In Henry’s case, her positive inner voice leads her to overcome challenges, while in Eva’s case, a negative inner voice leads to some pretty destructive behaviors.

Thank you for answering my questions, Maria! Continue to follow the blog tour at the following blog stops:

Thanks to the generosity of Random House, I have TWO (2) copies of Jersey Tomatoes are the Best for two lucky people! To enter, fill out this form here. This giveaway is open to US mailing addresses only, and ends Monday, April 11. Good luck!
Posted by Steph Su at 8:30 AM