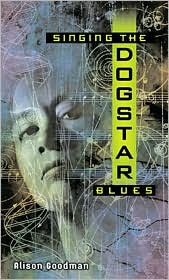 17-year-old Joss Aaronson is an irreverent harmonica player, a first-year student in the time-jumping program at Australia’s Centre for Historical Studies, and a stealthy player in the game against authority. When the Centre’s first alien student, a Chorian named Mavkel, chooses her as his time-jumping partner, the two form an unlikely alliance. For Chorians need to be part of a pair to survive, and Mavkel has lost his birth-pair.

Joss tackles prejudiced teachers, heavy security, a distant mother, and her own enigmatic background, but when Mavkel begins to waste away, Joss knows that the only way to save him is to go back in time and discover her own lineage. The result is a startling discovery that will rock what everyone believes of the Centre.

It’s been a while since I’ve read a straight-up science-fiction YA novel, and yet SINGING THE DOGSTAR BLUES proves to be one of the best of its genre. With a great protagonist and a fully realized world, this small book will suck you in so fast you won’t even realize when you’ve lost your heart to it.

Joss is, without a doubt, my kind of girl. A bit jaded, a bit too smart for her own good, she is thoroughly entertaining to read about. Her tongue-in-cheek observations and flagrant disregard for Centre rules make her the opposite of the passive protagonist I typically dread in YA lit, and yet she’s not so rebellious as to be unrelatable. She is, in a sense, the kind of “bad girl” most readers have secretly imagined themselves being.

Science fiction is difficult to write because it involves creating a thorough world and to consider the implications of adding any detail to the story. Luckily, Alison Goodman’s world in SINGING THE DOGSTAR BLUES is remarkably believable and “real”: I could very nearly see all that Joss sees through the sharp and precise writing.

The one complaint I had about this book was the predictability of the ending. I figured out how things were going to unfold several chapters before Joss did. This is a recurring weakness in Goodman’s novels (her YA fantasy Eon: Dragoneye Reborn had the same thing happen), and yet doesn’t majorly detract from my utter delight in reading this book. Overall, I can solidly recommend SINGING THE DOGSTAR BLUES as one of the best YA science fiction novels ever written. Don’t miss out on this one!


Cover discussion: 3 out of 5 - I've seen better, and I've seen worse. I can see that as Joss, particularly as she is of mixed ethnicity, and that rebellious look on the model's face fits well with my idea of Joss.